Review - And Then There Were None by Agatha Christie

Title and Author: And Then There Were None by Agatha Christie
Publisher: Harper
Publication Date: 1939
Paperback: 224 pages
Genre: Mystery/Thriller 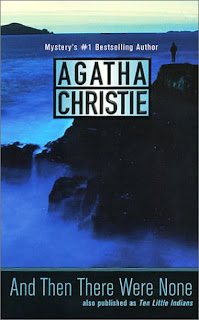 Summary:
First, there were ten - a curious assortment of strangers summoned as weekend guests to a private island off the coast of Devon. Their host, an eccentric millionaire unknown to all of them, is nowhere to be found. All that the guests have in common is a wicked past they're unwilling to reveal - and a secret that will seal their fate. For each has been marked for murder, and one by one they begin to fall prey to an unseen hand. As the only people on the island, unable to leave and unable to call for help, they know that the only possible suspects are among their number. And only the dead are above suspicion.
Review:
I’m a huge Agatha Christie fan and this is, in my opinion, by far one of her best books. You won’t find Poirot or Miss Maple in it, only a set of 10 suspects and one of them is the murdered. Some of Agatha Christie’s plots are related to popular rhymes and so is this one, Ten Little Indians being the popular rhyme in question.
Ten people are randomly selected and lured into an island off the English coast. They are all accused of murder. A murder they were involved in but could never be convicted of.
They quickly realize they are the only ones in the island and one by one they start to die. One of them is clearly doing the killing, but which one exactly?
The characters in this book come across as vibrant and real and most of them are quite likeable even though they’re all possible murderers. The dialogue between them is extremely well written and clear. I felt like I understood who the characters were and what they wanted right from the start.
There was no boring part in this book. The plot is fast paced and intriguing. You’ll want to keep reading so you can find out what happens next, especially if you’re a mystery fan like I am.
This time not only will you be wondering who the murdered is, you’ll also find yourself wondering who the next one to die will be.
In the end, when the murderer is finally revealed, you will more than likely be surprised.
I really enjoyed this book and it stands out as one of the best I’ve ever read. Agatha Christie never disappoints and in this book she managed to present both an exciting mystery and an engaging thriller.
Rating: Must Read
Posted by Carla at 7:46 PM