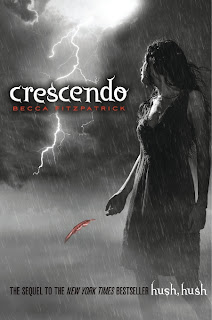 Summary:
Nora Grey's life is still far from perfect. Surviving an attempt on her life wasn't pleasant, but at least she got a guardian angel out of it: a mysterious, magnetic, gorgeous guardian angel. But, despite his role in her life, Patch has been acting anything but angelic. He's more elusive than ever and even worse, he's started spending time with Nora's arch-enemy, Marcie Millar.
Nora would have hardly noticed Scott Parnell, an old family friend who has moved back to town, if Patch hadn’t been acting so distant. Even with Scott's totally infuriating attitude Nora finds herself drawn to him - despite her lingering feeling that he's hiding something.

Haunted by images of her murdered father, and questioning whether her nephilim bloodline has anything to do with his death, Nora puts herself increasingly in dangerous situations as she desperately searches for answers. But maybe some things are better left buried, because the truth could destroy everything - and everyone - she trusts.
Review:
It took me a while to actually pick this book up and read it. I was excited for it but I was also a little scared. I did not know what to expect and I was afraid I wouldn’t like it for some reason (I often feel like this about sequels) but I definitely did.
The book starts at Delphic Beach where Nora and Patch are spending some nice time together. There Nora runs into Marcie who manages to make her feel horrible about herself. She seeks comfort in Patch. However, after a steamy make out session in his car, Patch abruptly flees, leaving Nora alone and thinking she might have done something wrong.
That feeling of insecurity will stick with Nora for most of the book, especially when she and Patch drift apart.
Crescendo drew me right in and I couldn’t stop reading and trying to figure out what would happen next.
It was nice reading about Nora and Patch again, even though they have to face several problems in their relationship. The book made me remember why I liked Patch so much, although he did manage to irritate me a few times. :P
Several new characters are introduced in Crescendo and all of them contribute to the story somehow. Not everyone is who they seem to be, though. The backgrounds of some characters we already know are also explored.
In Crescendo Nora finds herself, once again, in the middle of a tangled web of lies, mystery, misunderstandings and, of course, danger.
I have to confess I had no idea where the story was going right until the end and that cliffhanger killed me! I’m so curious now!
All in all, Crescendo is a great, fast and interesting read. It was able to keep me entertained and guessing right until the end. The cliffhanger in the end is almost evil and I can’t wait to read Silence now!
If you’re a YA and Paranormal fan you should definitely give this series a try.
Rating: Somewhere Between Worth Your Time and Must Read (4 ½ Stars)
Goodreads
Bookdepository
Posted by Carla at 2:30 PM