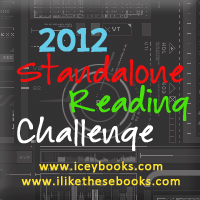 What books count towards the 2012 Standalone Reading Challenge?
Any Young Adult standalone book that is released between December 27, 2011  and December 31, 2012. Any format (paperback, hardcover, e-book, ARC) counts, but they must be read during the year 2012.

Where can I find out which books can be read for the SARC?
There's a list for you HERE. 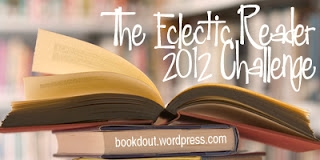 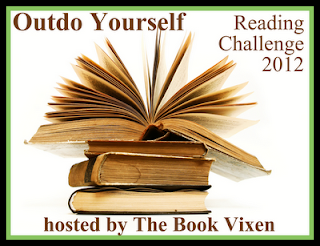 You can sign up for this challenge HERE.
Details:

Email ThisBlogThis!Share to TwitterShare to FacebookShare to Pinterest
Labels: 2012 Outdo Yourself Reading Challenge

Teaser Tuesdays is a weekly bookish meme, hosted by MizB of Should Be Reading. Anyone can play along! Just do the following:
This week I'm reading: 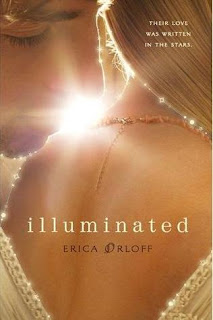 Illuminated - Erica Orloff
“And you’re not excited the slightest bit about sleuthing with August.”
A cab pulled over to pick us up. I had August’s card in my hand. I glanced over at Uncle Harry. “Well, if I have to sleuth
this summer and play Nancy Drew . . . there’s nothing like a hot guy to make it even more interesting.”
"And there, alone, I cried. At first, it was a weird aimless crying. I cried for Miriam, for August, for Professor Sokolov, for Astrolabe and Heloise and Abelard. And then, finally, I felt the hard tears start, and I cried for me. For the motherless little girl and the woman in the picture in my room whom I never had the chance to know."

What about you? What are you reading this week? Are you enjoying it?
Posted by Carla at 2:55 PM 4 comments: 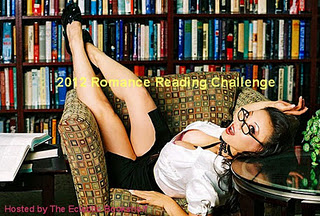 This reading challenge is for any genre of Romance with the exception of YA and Erotica.  Have fun with this one peeps!

Hello!
Thank you for voting for another Team Smackdown.
The winner of the Team Smackdown - Team Logan vs Team Zachary  from the Shade Series by Jeri Smith-Ready:
Team Zachary!
Team Zachary will face off another Team in the future! Thank you to everyone who participated and voted! :)
Now, when it comes to the giveaway. The winner of a bookmark from CreationsbyGC is Shina . Congrats!
I could still really use your help with this feature so if you are interested in being a team advocate please let me know! I'll show you the list of Teams that'll be featured. :)
Posted by Carla at 3:36 PM No comments:

What's In A Name 5 Reading Challenge

What's In A Name 5 Reading Challenge 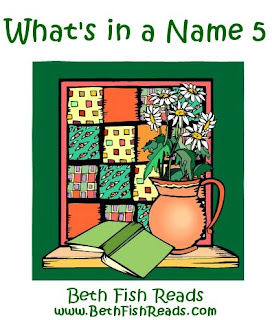 Here's How It Works

Between January 1 and December 31, 2012, read one book in each of the following categories:
The book titles are just suggestions, you can read whatever book you want to fit the category.

Email ThisBlogThis!Share to TwitterShare to FacebookShare to Pinterest
Labels: What's In A Name 5 Reading Challenge

Faves of TwentyEleven: The Random

It's time for another Faves of TwentyEleven.
This feature is hosted by Inkcrush. 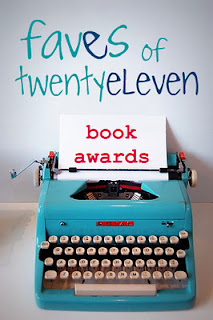 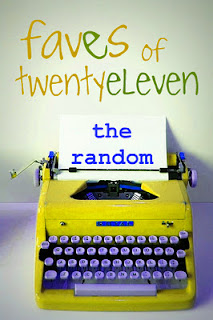 1. Fave First Sentence:
"Come on, baby,” he murmured. “Give it up for me. You know you want to.” - Dell in Animal Attraction by Jill Shalvis
I think this was my favorite first sentence. It definitely made me interested!  Dell is talking to a stray kitten there by the way. :P

2. Fave Book Title:
Love is the Higher Law by David Levithan
Other Words For Love by Lorraine Zago Rosenthal
Starcrossed by Josephine Angelini

4. Book With The Best Food In It:
Too Hot to Touch by Louisa Edwards
There are recipes in the end!

5. Book With The Most Sensual Weather:
Instant Attraction by Jill Shalvis


It's not exactly an embarassing cover, I simply don't like it!

7. Can't Believe You Waited This Long To Read The Book:
Vampire Academy by Richelle Mead
I wasn't sure I would like this book so it took me a long time to actually pick it up but I'm glad I did because I ended up enjoying it a lot.

8. Book You'd Give Your Mum/Sister To Read:
Double Crossing by Meg Mims

9. Book You'd Give Your Dad To Read:
And Then There Were None by Agatha Christie
A good and interesting mystery. :)

10. Book You'd Like To Give Your Past Self To Read:
Fixing Delilah by Sarah Ockler

11. Book That Lived Up To The Hype:
Vampire Academy by Richelle Mead

12. Book You Stayed The Latest To Finish:
The Unbecoming of Mara Dyer by Michelle Hodkin
I just had to know what was going to happen next!

13 Book You Were Dying To Get Your Hands On The Most:
The Unbecoming of Mara Dyer by Michelle Hodkin
Going Too Far by Jenniger Echols

14. Fattest Brick Of A Book You Read:
I'll leave this one open because I really can't remember which was the "fattest" book I've read this year. :S
15. Killer Cliffhanger Award:
The Unbecoming of Mara Dyer by Michelle Hodkin
Evil, evil cliffhanger! :)

Email ThisBlogThis!Share to TwitterShare to FacebookShare to Pinterest
Labels: Faves of TwentyEleven: The Random

We all want to promote our reviews, don't we? This is a way of letting other people know about them. Just leave a link to your review below.
Go visit the other reviews and let people know what you think about them! 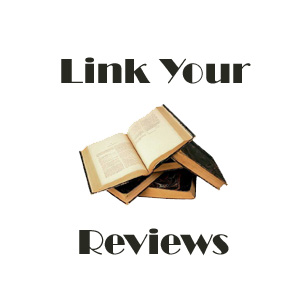 This will is weekly feature posted on Thursdays. :) 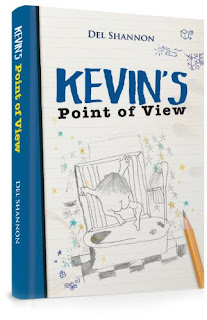 Summary:
To escape the emotional turmoil of his father’s death 12-year-old Kevin Tobin has retreated inside himself, developing his imagination into a dangerous foil and a powerful ally. While he antagonizes everyone with his superhero antics, his ability to escape inside himself becomes critical to his survival after his life is once-again turned upside down a year after his father’s death. When a mysterious package arrives in the mail, Kevin and his best friend are hunted by a ruthless villain who is determined to retrieve the package, which holds the key to his plans for world domination. After enlisting Kevin’s teenage sister and her pizza-delivery boyfriend in a battle for control over time itself, the group escapes into the mountains west of Boulder, Colorado and eventually discover that Kevin’s entire existence is because of the love of someone we never expected.
Review:
I received Kevin’s Point of View from the author in exchange of an honest review and I have to confess this is one of those different but very interesting books that keep you entertained.
Kevin is a boy who, since the death of his father, escapes inside his own mind when reality gets too tough to handle. One second he is Kevin and the other, he’s a hero who manages to find his way out of any and every difficult situation.
When a mysterious package arrives, Kevin discovers a device called influxitron and is pulled into an adventure when a man comes looking for that device. A man who’s intent is to kill Kevin and his friends.
I think Kevin is a very good main character. It is easy to like him since he is so sweet and curious. In order to overcome the pain of losing his father and dealing with his life, he withdraws into his mind. He’s very imaginative, which I really liked.
The pace of the story is fast, making it hard to put down. The plot itself makes you want to know what is going to happen next to Kevin and everyone else.
I think this is a very interesting book, with a little something for everyone. There’s mystery, action, adventure and a few good twists.
The book can become a little strange at some parts but that’s all part of the story.
All in all I enjoyed this book and would recommend it especially to middle grade readers, although I think anyone would be able to enjoy it.
Rating: Somewhere between Worth Your Time and Must Read (4 ½ Stars)
Goodreads
Posted by Carla at 2:46 PM 1 comment:

Email ThisBlogThis!Share to TwitterShare to FacebookShare to Pinterest
Labels: book review, Del Shannon, genre: young adult, rating: somewhere between well worth your time and must read

2012 Chick Lit Reading Challenge. You can sign up for the challenge HERE.

Rules:
Challengers will read 12 chick lit books throughout 2012. You can (obviously( read more books of other genres, but you need at least 12 chick lit to count for this challenge.
Two of the twelve books need to be from debut authors. The debuts should be released in 2012.

10. Exclusively Yours (Kowalski Family 01) - Shannon Stacey
11. It Started With a Kiss - Miranda Dickinson
12. A Winter Flame - Milly Johnson
Posted by Carla at 1:34 AM No comments: 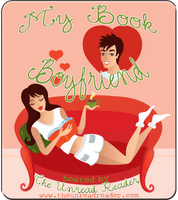 My Book Boyfriend is a weekly meme, hosted by Missie at The Unread Reader. It is a weekly meme where we talk about a literary crush including stats, a picture of what you imagine he looks like and some quotes from him that make you swoon.  If you are interested in participating please check out the My Book Boyfriend Introduction Page over at Missie's blog The Unread Reader.
This week my book boyfriend is:
Lucas Delos from Starcrossed by Josephine Angelini 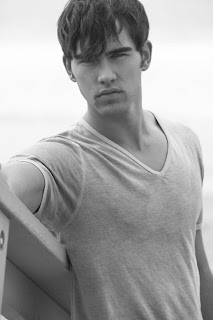 Eyes: Blue
Hair: Short and dark
More info: As a demigod Lucas is incredibly strong, plus he can fly! He can be really sweet, especially to Helen and it's nice seeing him interact with his large family. 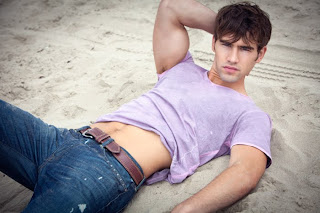 "Lucas was standing in front of his locker about twenty feet away, staring back at Helen while the world waited for gravity to switch back on. He was tall, over six feet at least, and powerfully built, although his muscles were long and lean instead of bulky. He had short, black hair and a dark end-of-summer tan that brought out his white smile and his swimming-pool blue eyes."
"Do you want me at all or do you think its fun to tease me like this?" she asked feeling rejected and humiliated. "Wont you even kiss me?" she finally struggled on to her back where she could at least see his face.

"If i kiss you, i wont stop" he said in a desperate whisper as he propped himself up on his elbows to look her in the eye."
"I only have so much willpower Helen" he whispered "And since you apparently sleep in the most ridiculously transparent tank top i've ever seen, i'm going to have to ask you to get under the covers before i do something stupid"
“As soon as I think I'm in control you make me laugh or you say something so smart and I feel like I lose a bit of myself. I thought I was prepared, but this is much harder than I imagined." 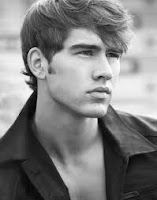 Model Nic Balducci
So, what do you think? I couldn't seem to find the perfect Lucas but I think Nic Balducci is an acceptable choice.
Posted by Carla at 2:53 PM 9 comments: