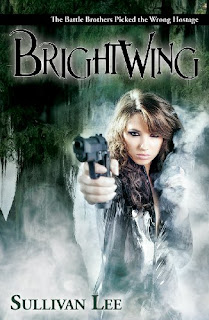 Summary:
A Criminal Love Story.
Edgar and Mallory Battle are on the run after a spectacularly violent escape. Now, with a trail of bodies behind them, they need a hostage against the inevitable standoff with the police. Their first doesn't last long, thanks to sociopathic Mallory. Edgar has been hiding his brother's crimes since they were kids. Now he's torn between family loyalty and self-preservation.
They carjack Lucy Brightwing, a criminal fresh from her own heist, with a fortune of uncut gems hidden in her vehicle. She could escape - but she won't abandon her millions. She could kill the Battle brothers, but she has to be careful. For one thing, if the law investigates, they'll find her ill-gotten loot. For another, her own life is sacred. She's the last member of a Florida paleoindian tribe thought to be extinct - the Tequesta. With her share of the money she plans to buy, bribe and blackmail her way into her own ancestral tribal lands in the heart of the Everglades: a Tequesta nation.
Lucy leads the brothers into her beloved swamp, determined to kill them. But when she falls for Edgar she must decide whether to risk her heritage and the future of her tribe to save the doomed brothers..
Review:
I received Brightwing from the author in exchange of an honest review.  I wasn’t sure what to expect from the book but I ended up enjoying it. I was definitely pleasantly surprised.
Brightwing centers on Lucy and also Edgar and Mallory Battle and all of them are criminals. Edgar and Mallory are on the run. They are wanted for several murders and robberies and while trying to escape the police they decide to take a hostage. That hostage is Lucy who’s definitely not who she seems to be. She has commit her own  crime and is easily able to outsmart the Battle brothers and take them to her swamp. The only problem is… Lucy starts to fall in love with Edgar.
Lucy is a very strong woman. She’s smart, resourceful and all around kick-ass. She is the last of the Tequesta Indians and she is determined to create her own reservation so that she can preserve her family’s story. I liked Lucy. She was sure of herself and not even when she stared to fall in love with Edgar did she forget her objectives.
Edgar’s a good character as well. Mallory, however, has serious mental problems making him a character you can’t help but to dislike and maybe even fear.
The romance between Lucy and Edgar plays an important part on the book but it doesn’t take center stage, overclouding everything else. I appreciated that.
The beginning and the end of the book is action packed. There’s suspense and mystery, which is another thing I really like. The book’s story surprised me and kept me entertained.
All in all, this book is extremely well-written and the characters are very well developed. I enjoyed reading about Lucy’s background and her Indian origins. Plus, it was quite funny seeing Edgar realize his hostage is not really a hostage, after all.
If you have the time, you should definitely give this book a try. If you like mystery and suspense I think you’ll like this book.
Rating: Worth Your Time (4 Stars)
Goodreads
Thank you for the chance to read this book! I'll post a guest post by Sullivan Lee later today so stay tuned for that. :)
Posted by Carla at 1:32 PM