Title and Author: His Wicked Games by Ember Casey 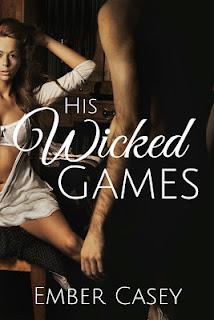 Summary:
Trapped with a billionaire in his mysterious mansion... Can she beat him at his own game?
Lily Frazer would do anything to save the Frazer Center for the Arts—even take on the infamous billionaire Calder Cunningham. When Lily breaks onto the Cunningham estate, she only wants to find and reason with Calder. (All right, all right, she wants to punch him in the face, too, but that's Plan B.) As it turns out, the arrogant billionaire is willing to give her the money he promised, but there's a catch: she must win it from him.
And the games he has in mind aren't exactly... innocent.
Lily isn't about to give up the money without a fight (or let some haughty bastard seduce her), but she quickly discovers that there might be more to the brooding Calder than she initially perceived. As their games of cat and mouse become increasingly sexual in nature, she suddenly finds herself confused by her own emotions. Can she deny her attraction long enough to win the money she needs?
A contemporary, steamy take on Beauty and the Beast, His Wicked Games is a tale of devilish deeds, wild passions, and wicked romance.

Review:
His Wicked Games fits into the steamy contemporary romance genre and is a fun, light and interesting read.
After Calder Cunningham cuts his financial contribution to the Frazer Center for the Arts, Lily Frazer is determined to find out why and make him change his mind. She’ll do whatever she needs to do and that includes breaking into Calder’s mansion so she can talk to him.
Lily is our main character. She’s very determined and it’s obvious she loves her father and their center enough to do whatever it takes to save it. She loves art, is smart and sure of herself. She might just find herself way over herself with Calder.
Calder is the main male character. Lily thinks he’s arrogant, too sure of himself and just another rich playboy. Of course she also thinks he’s quite handsome and sexy. There’s more to him than what meets the eye, though. He´s actually very intelligent and charming and is dealing with more than Lily initially thinks.
There’s some clear attraction between Lily and Calder and even though Lily is determined to not get involved she’s not quite able to resist him and his games. There’s good chemistry and some fun and steamy scenes between them.
Plotwise, the story revolves around Lily’s attempts to save the art’s center and the lengths she would go to convince Calder to invest on it.
Calder is hiding some secrets that can put any relationship between them – professional or not – at risk. Add in Lily’s controlling ex-boyfriend and these two have some real problems.
All in all, His Wicked Games is a fun, light and fast read. The story is interesting and well-written and the chemistry between the characters was able to keep me very entertained.
The book ends in a good place but I still want to read the next one in the series and find out what will happen to the characters.
If you like a good contemporary romance with a few steamy scenes, you should give this book a try. It’s a fun read! 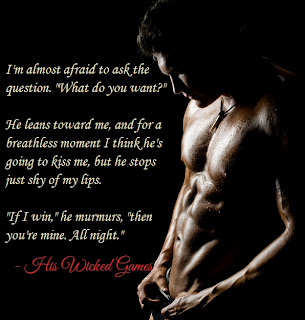 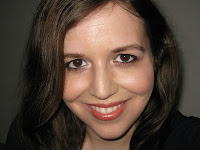 Ember Casey is a twenty-something writer who lives in Atlanta, Georgia in a den of iniquity (or so she likes to tell people). When she's not writing steamy romances, you can find her whipping up baked goods (usually of the chocolate variety), traveling (her bucket list is infinite), or generally causing trouble (because somebody has to do it).

Review - Coming Back To You by Devon Youngblood

Title and Author: Coming Back To You by Devon Youngblood
Publisher:
Publication Date: Juy 22nd, 2013
Paperback/Hardcover: 177
Genre: New Adult
Find it at: Goodreads / 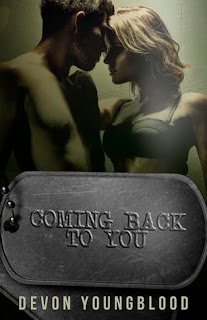 Summary:
Maura is a twenty three year old who is still coping with her parents' sudden death two years ago. She recently graduated from college and now has her own catering business. A best friend-roommate who has been there through it all and helps make life manageable.
Until first love Pierson Hammer comes walking back into her life.
Pierson has demons of his own, after serving in the military for five years. Tormented from his past and present. he comes home hoping to make amends with Maura.
Can Maura forgive Pierson for leaving her all those years ago? Can she trust him with her future? Will she open herself up completely?

Review:
I have received this book as part of a blog tour in exchange of an honest review.
Pierson left his home town and Maura when he decided to join the army. Maura moved on with her life but, years later, Pierson is back and not exactly the same.
I had some trouble connecting with Maura in the beginning but, as the story developed I began to understand and like her more. She’s smart and has learned to stand up for herself. I didn’t always agree with her decisions and actions but I still liked her.
I wasn’t so sure about Pierson and his intentions in the beginning but then I began to like him more and more.
Maura and Pierson’s relationship is complicated. There’s a lot going on with them, after all. The double POV helped understand both characters a little bit more.
All in all, Coming Back To You in an interesting book that deals with an important topic. I didn’t always agree with the characters and the things they did but I still enjoyed the book. It’s a good story with good moments.
The author did a good job with the story and if you like New Adult, give this book a try.
ld read this series!


Rating:  Somewhere Readable and Worth Your Time (3 ½ Stars)

Prize: Coming Back To You Signed Bookmarks