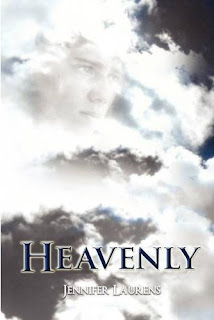 Summary
I met someone who changed everything. Matthias. My autistic sister's guardian angel. Honest. Inspiring. Funny. Hot. And immortal. That was the problem. What could I do? I did what any other girl would do-I fell in love with him.

Zoe's sister darts in front of cars. Her brother's a pothead. Her parents are so overwhelmed; they don't see Zoe lost in her broken life. Zoe escapes the only way she knows how: partying. Matthias, a guardian sent from Heaven, watches over Zoe's autistic sister. After Zoe is convinced he's legit, angel and lost girl come together in a love that changes destiny. But Heaven on Earth can't last forever.
Review:
Angels are popular right now but Heavenly isn’t your usual fantasy story. Jennifer Laurens’ version of who guardian angels are is actually very believable.
Heavenly is Zoe’s story. She a teenager struggling with a few issues like learning to deal with her autistic sister and drug-addicted brother. Her parent’s obviously care about their children but they are oblivious to the kids’ struggles.
Zoe parties hard and drinks more than she should until she meets Matthias, a young man who seems to always show up when her sister is in danger.
In the beginning of the book Zoe is very self-centered. She enjoys partying and hooking up with random guys. The drinking and party are a means to escape her problems, though. After she meets Matthias, Zoe changes and becomes a better person. She cares for her family and it’s obvious she just wants to help them.
Matthias is a great character. He’s a wonderful guardian angel! He’s sweet and caring and very patient.
The relationship between Zoe and Matthias develops nicely. It’s nice being able to see Zoe change and become a better person due to Matthias good influence.
I was immediately drawn into this story and enjoyed reading about Zoe’s life and her struggles. Plus the portrayal of a family raising a child with autism is very realistic.
The ending of Heavenly surprised me a lot and I think it will surprise you as well. I can’t wait to read the next book of the series now so I can find out what will happen.
All in all Heavenly is a very well written book that deals with some important issues such as drug and alcohol addiction and autism. I would recommend this book to any Young Adult Paranormal fan.
This is not your typical angel story and I think you will be pleasantly surprised.
Rating: Worth Your Time (4 Stars)
Goodreads
Bookdepository
Posted by Carla at 9:27 PM