Interview and Review - The Seed by Fola 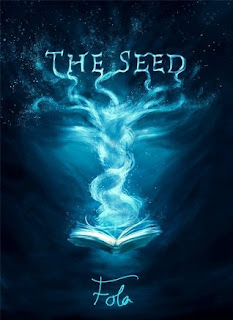 Summary:
Throughout our lives, many things may lead us to forget who we truly are. Result? Slowly yet inevitably, cages and chains enslave our thoughts and slay our freedoms.
Down the ages, men have thus fallen for hosts of illusions, confusions and fears - except for the seven dreamers whose stories this book contains. These mad truth-seekers (who oddly share the same name) did not follow others' flow to slavery; rather, they heeded a voice in their heads that led them to obsession with an idea long thought extinct, buried beneath the sands of time: The Seed.
In this book you will take a rollicking metaphysical ride that starts in ancient Egypt, moves to the Grand Greek Era, then to Rome, Arab Alexandria, on piratic High Seas, to Switzerland and circuses, into a Christian era interlude, then to modern Egypt (2007) and lastly, to a sort of Garden of Visionary Epiphany that will leaves you on and past the brink of enlightenment...
Review:
The Seed was sent to me by the author in exchange of an honest review and I have to say this is an intriguing book.
This book can be a little hard to read sometimes especially when it refers to mathematical analysis and what derives from there, which I must confess I have no real knowledge about. I found this book to be interesting and profound, though.
One thing I really liked was the mythology references because that’s a theme that has always interested me.
On this book you get the chance to travel to several countries and experience different cultures.
I think this book combines several genres like history, mythology, philosophy and fiction.
Even though this is not a light read, if you are interested in thinking about and analyzing some of life’s greatest questions like where have you been and where you are going, then this book is definitely for you. It will make look at things in a different way.
Rating: Somewhere Between Readable and Worth Your Time (3 ½ Stars)
Goodreads
Interview with Fola:
Fola was kind enough to answer some of my questions:
1 - Tell us a little bit about yourself?
F: Well, I am Fola, born in Egypt, 1984, around 27 years now, though I don’t really believe in the idea of counting time. I was lost, brainwashed like the majority of earth’s citizens till I went to Switzerland, and had some time alone to see what I couldn’t see. There the voyage began from furthest branch till I reached “The Seed”.
2 - Have you always wanted to be a writer?
F: Never intended to be one, I always wanted to be a soccer player or a manager…
3- What inspired you to write The Seed?
F: Whenever an idea hits my head, I try to capture it on paper. That’s how it all began, idea after idea; I began linking them. I thought these philosophies are colorless and hard to read, so I began forming historical stories around these philosophies painting historical colors in the reader’s head, like Ancient Egypt, Ancient Greece & the Roman Empire, and that how it all began...
4- What would you like your readers to learn or take from your book?
F: That’s a hard question to answer, for the book if full, each chapter has 3 or 4 ideas to grasp, but in other words, if every one found their SEED, the world would be a much better place.
5 - Is there a particular writer/s who has/have inspired you to write?
F: I never read a book before, I wanted “The Seed” to be as original as possible, only inspired from pure inspiration…
6- Is there anything you want to say to your readers or that you would
like them to know?
F: Take nothing in this life for granted…
Thank you!

Email ThisBlogThis!Share to TwitterShare to FacebookShare to Pinterest
Labels: Author Interview, book review, Fola, rating: between readable and well worth your time