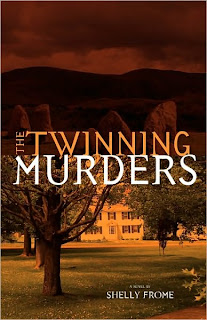 Summary:
The Twinning Murders is a modern day classic mystery centering on the ventures of Emily Ryder, a thirty-something rambler and tour guide. The story opens just before she embarks on this year's Twinning ritual exchange. It's between her historic New England home and its sister village deep in Dartmoor, a wild upland area in the west of the county of Devon, England. Emily becomes personally involved in a suspicious death.. A few days later, at the Twinning itself, her main client meets the same fate. As Emily's world continues to unravel, and though she has little help, she finds herself compelled to piece together the games being played on both sides of the Atlantic.
Review:
This book was sent to me for an honest and fair review by Naomi at UK and Beyond Book Tours.
Emily Ruder is a tour guide in Lydfield in Connecticut, specialized in taking clients to England. The book begins when Emily is getting ready to take a group to Lydfield in England for the annual Twinning Exchange, an event to celebrate the connection between the two “twin towns”.
Before they make their trip, though, an acquaintance of Emily’s - Chris Cooper - is killed in an accident. Emily is worried his death was more than just an accident since the Gordon Development Company has purchased an expanse of land with the intention of building a condominium community there and Chris Cooper was the head of the town’s Planning Committee and was killed just before the voting to approve the project took place.
When another person shows up dead under suspicious coincidences, Emily knows there’s something wrong and decides to find out just what that is.
All in all I enjoyed this book. The characters are all very well developed and eccentric. The plot is extremely well written, interesting and reads fast.
The Twinning Murders mystery has a certain Agatha Christie feel to it, which I loved. This story is all about greed, money and power and in the end I was quite surprised.
I would recommend this book to any mystery fan.
Rating: Worth Your Time