Review - Falling Under by Gwen Hayes 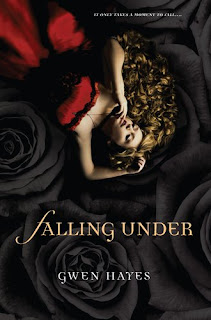 Summary:
Theia Alderson has always led a sheltered life in the small California town of Serendipity Falls. But when a devastatingly handsome boy appears in the halls of her school, Theia knows she's seen Haden before- not around town, but in her dreams.

As the Haden of both the night and the day beckons her closer one moment and pushes her away the next, the only thing Theia knows for sure is that the incredible pull she feels towards him is stronger than her fear.

And when she discovers what Haden truly is, Theia's not sure if she wants to resist him, even if the cost is her soul.
Review:
I’ve read a lot about this book in the last few weeks and was really excited about it. Gladly, I wasn’t disappointed. Falling Under is a fast read that was able to keep me interested and entertained.
Theia Aldersons life changes completely when she sees a burning man falling from the sky.
Theia has always lived a very sheltered life but when she sees the new kid at school for the first time, she immediately knows something is very wrong. That new kid – Haden Black – is the same person that she saw fall and that haunts her dreams every night…
When it comes to the characters, Theia is extremely likeable. I was immediately able to connect with her. She led a sheltered life and it was great being able to see her grow into her own person.  She was willing to do anything for Haden, even switch places with him, which I think shows exactly just how she felt about him.
One other thing I liked about her was that she  was prepared to believe in what was unbelievable from the start.No beating around the bushes here.
Haiden was my favorite character, though. He is wonderfully sexy and extremely complex. He’s a mix between a bad boy and an innocent boy and the mystery surrounding him only made him more interesting. Even when I found out what he was I could still see the boy in him. I couldn’t help but to root for him.
Theia’s friends were also very good characters. All of them brought something interesting to the story.
The romance between Theia and Haden was a little too similar to Edward and Bella in Twilight but I was able to overcome that. (I like Twilight!) It felt right to have them both together and it was obvious how they felt about each other
Falling Under is a well written book. Hayes is capable of describing situations and things in a very realistic way. The world she created was very well described and her characters were believable.
I enjoyed this book very much and I think that if you are a Twilight and paranormal fan you will like this story.
Rating: Worth Your Time
Good Reads
Book Depository