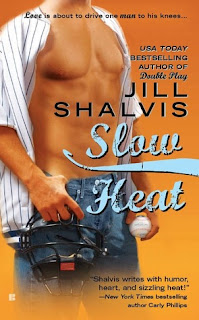 Summary
After a woman claims she's pregnant with Wade O'Riley's love child, Major League Baseball's most celebrated catcher and ladies' man is slapped on the wrist by management and ordered to improve his image. His enforcer is the team's publicist, the tough and sexy Samantha mcNead.
When Wade needs a date for a celebrity wedding, Sam steps up to the plate as his "girlfriend". But given her secret crush on him and that one awkward night a year ago in a stalled elevator with too much Scotch, the whole thing is an exercise in sexual tension.

Wade is thrilled when the pretense turns into an unexpected night of hot passion. But the next day Sam is back to her cool self. As a catcher, Wade's used to giving the signals, not struggling to read them. Now, to win the love of his "pretend" girlfriend, he needs a home run--even if it involves stealing a few bases...
Review:
Slow Heat is the second book in the Pacific Heat series and, just like the first one, it didn’t disappoint me. I really liked Double Play so I couldn’t wait to read this one.
Slow Heat is about Wade – the Heat’s team catcher – and Sam – the team’s publicist – and the relationship they are forced to fake after a woman claims she is pregnant with Wade’s child. Wade and Sam shared one steamy night once and neither of them really got over it, which means their relationship might not be as fake as one might think.
Wade is a good character. I already liked him Double Play and in Slow Heat we get to learn more and more about him. He’s a laid back, relaxed guy who likes to see the bright side of things. Women are constantly dropping in his lap but, despite being a bit of a playboy, he hasn’t been with anyone else since the night he shared with Sam. Sweet, right?
Sam is an interesting character as well. She liked to keep everything under control but she just can’t seem to get over Wade and her feelings for him. She wants to forget him but can’t, especially not when she is forced to take care of her nephew and it turns out Wade is great with children.
The relationship between this two is very interesting. While Sam is trying to forget Wade, he doesn’t understand why he should forget the night they spent together. There’s a lot of tension and attraction between the two of them.
I really like Jill Shalvis and her writing style.  There’s a lot of sexual tension in all her books and banter between the characters, which I love.
All in all, Slow Heat is an entertaining book I’m sure any contemporary romance fan will like.
Rating: Worth Your Time (4 Stars)
Goodreads
Bookdepository
Posted by Carla at 2:30 PM