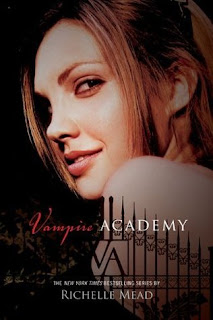 Summary:
St. Vladimir’s Academy isn’t just any boarding school—it’s a hidden place where vampires are educated in the ways of magic and half-human teens train to protect them. Rose Hathaway is a Dhampir, a bodyguard for her best friend Lissa, a Moroi Vampire Princess. They’ve been on the run, but now they’re being dragged back to St. Vladimir’s—the very place where they’re most in danger. . . .
Rose and Lissa become enmeshed in forbidden romance, the Academy’s ruthless social scene, and unspeakable nighttime rituals. But they must be careful lest the Strigoi—the world’s fiercest and most dangerous vampires—make Lissa one of them forever.
Review:
It took me a long time to pick this book up. I’ll confess I was skeptical about it but I ended it enjoying Vampire Academy much more than I could ever have imagined I would.
This is a great first book to a series and I actually couldn’t put it down. It kept me entertained and curious.
Vampire Academy is not your usual YA vampire book. The writing is actually quite mature and the types of vampires in this book are not typical ones. There are Moroi vampires, who are the good vampires, are alive and are able to use magic connected with the four elements: air, earth, water and fire. There are also Strigoi vampires, who are the bad vampires, are technically dead and are not able to use magic.
While both types of vampires need blood, Strigoi kill to get it while Moroi don’t.
There are also Dhampirs, who are half Moroi and half human. Dhampirs don’t need blood and are trained to be the guardians of Moroi because of their strength. The vampire academy is where Dhampirs train.
In the beginning of the book, Rose – a Dhampir – and Lissa – a Moroi – are on the run from the academy where something happened that made them need to get away. Rose and Lissa are being hunted and are eventually captured by the academy’s guardians, who take them back to the academy, so they can complete their education. This is the first time Rose sees Dimitri – a guardian – and her future mentor and love interest.
I think I liked almost every character in this book, which is always a plus.
Rose’s a very interesting character. She can be a little arrogant sometimes but she’s also very loyal, feisty, brave and strong. She would do anything to keep Lissa and those she loves safe.
Dimitri was my favorite character, though. He’s swoon-worthy! He’s a little bit older than most characters in the book, so he shows more maturity than others. Dimitri becomes Rose’s mentor, role model and love interest. Some people say he is a God and he shows determination in everything he does.
The relationship between Rose and Dimitri is very interesting. They know they shouldn’t be together for several different reasons but the attraction between them is still too strong to deny!
I also liked the other characters in this book like Lissa, who is sweet and caring and Christian, who is incredibly sarcastic!
All in all I really enjoyed Vampire Academy. The book is well-written, fast paced and interesting. There’s a lot of action, romance and friendship. The characters are well-written and the plot is interesting and different.  I think any YA fan will be able to enjoy this book!
Rating: Must Read (5 Stars)
Goodreads
Bookdepository
Posted by Carla at 9:23 PM