Review - You Against Me by Jenny Downham 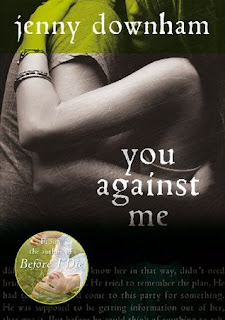 Summary
If someone hurts your sister and you're any kind of man, you seek revenge, right? If your brother's been accused of a terrible crime and you're the main witness, then you banish all doubt and defend him. Isn't that what families do? When Mikey's sister claims a boy assaulted her at a party, his world of work and girls begins to fall apart. When Ellie's brother is charged with the crime, but says he didn't do it, her world of revision, exams and fitting in at a new school begins to unravel. When Mikey and Ellie meet, two worlds collide. Brave and unflinching, this is a novel of extraordinary skillfulness and almost unbearable tension. It's a book about loyalty and the choices that come with it. But above all it's a book about love - for one's family and for another.
Review:
Once I read the summary for this book I was immediately interested. I had high expectations when I started reading You Against Me and definitely wasn’t disappointed.
Mikey and Ellie are two very different people. They live on different ends of the city and of the social and economic ladder. Ellie’s family would never approve of someone like Mikey so its’ safe to say that under normal circumstances Mikey and Ellie would never know each other.
When Ellie’s brother is accused of raping Mikey’s sister, though, both Ellie and Mikey lives change. Ellie is sure her brother is innocent. Mikey is sure his sister was indeed raped by Ellie’s brother so he comes up a plan: get Ellie to fall in love with him so she, eventually, confides in him and tells him everything she knows about what her brother did. Ellie is the only witness of what happened the night Mikey’s sister claims she was raped, after all.
As time goes by and Ellie and Mikey become closer, Mikey starts to forget the plan and fall in love with Ellie. At the same time, Ellie finds out about Mikey’s plan, complicating everything.
All the characters in this book are very realistic and their emotions and feelings make you feel like you know them and can relate to what they are going through.
Both Ellie and Mikey want to help their siblings and, even though that clearly means they are on opposite sides they can’t help being attracted to each other. They slowly start to know each other and fall in love.
Jenny Downham’s writing in this book is amazing. She is able to pull into the story and make you feel like you’re part of it. The characters and the places seem real in this book.
All in all this is a very well written and interesting book that deals with a powerful issue.
I would recommend this book to YA readers but keep in mind there are a lot of mentions about mature themes in this book. I don’t think the book will disappoint you, though.
Rating: Must Read (5 Stars)
Goodreads
Bookdepository
Posted by Carla at 2:06 PM

Email ThisBlogThis!Share to TwitterShare to FacebookShare to Pinterest
Labels: book review, genre: young adult, Jenny Downham, rating: somewhere between well worth your time and must read