Review - An Offer From a Gentleman by Jullia Quinn 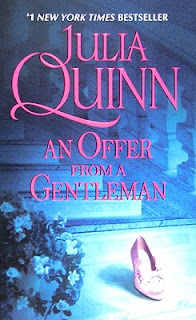 Summary:
The Bridgerton family is wealthy, well born, and universally admired. And with six of the eight Bridgerton children already mingling with society, it's no wonder they're mentioned so frequently in the most popular (and accurate) source of social news, Lady Whistledown's Society Papers. But not even the mysterious Lady Whistledown can identify the masked maiden who completely captivated the Bridgerton second son, Benedict, at his mother's masquerade ball -- a silver-clad beauty who vanished on the stroke of midnight. It was a magical night for Sophie Beckett, orphaned, illegitimate daughter of the Earl of Penwood. Attending the ball was a beautiful dream, sharing the evening with Benedict Bridgerton was the stuff of fantasy -- and returning home to her role as unpaid servant to her father's cruel widow and stepdaughters was a nightmare. Then she lost even the small security of that position, and things went from bad to worse. By the time Sophie met Benedict again, she was in truly desperate straits. He made her feel precious, even in rags, but Sophie had grave reservations about accepting.
Review:
Every now and then I enjoy reading a Julia Quinn novel. They never fail to entertain me.
An Offer from a gentleman is darker than most Julia Quinn’s books but it was still able to make me laugh and feel all warm and fussy inside.
An Offer From a Gentleman's plot is based on the fairy tale of Cinderella. There’s a wicked stepmother, stepsister and a handsome prince. There is also a masquerade ball where our heroine meets her prince but, unfortunately, is forced to leave him when the clock strikes midnight.
Sophie is a strong character. She has a very good sense of who she is. She takes proud in her dignity and sensibility. She could just have accepted to become Benedict’s mistress but she didn’t. She refused to be a kept woman. She sticks to what she believes in.
Benedict was definitely my favorite characters. He’s more serious than his brother’s but he’s also very charming and in possession of a subtle sense of humor. As the plot develops, Benedict has to deals with his feelings for Sophie and his lady in silver and by doing so his character grows a lot. In the beginning of the book he was trying to find himself and by the end I think he finally understands that he’s not just The Second Bridgerton. There’s much more to him than what meets the eye.
I highly enjoyed the romance between Benedict and Sophie. Their relationship was sweet and, at times, heartbreaking. The loves scenes between them were sizzling. Plus I really enjoyed reading about Benedict’s unraveling feelings for Sophie when he was determined to stay true to his lady in silver.
The moment he finally realized who the lady in silver is was a great one.
One other thing I enjoyed in this book was the fact that you see and learn more about the Bridgerton clan.
All in all this is a very well written book. Julia Quinn doesn’t normally disappoint me and I loved the way she managed to write a more serious story that deals with the differences between classes in a time where those differences where extremely important and accentuated.
Once more Julia Quinn managed to draw me into the story right from the start.
Rating: Worth Your Time
Goodreads
Book Depository