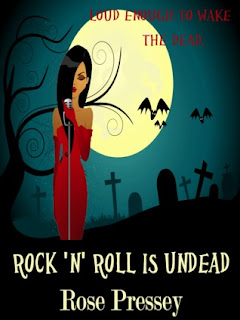 Summary:
Veronica Mason;lead singer of the rockabilly band The Voodoo Zombies discovers her vampire bass player staked through the heart. A vision of the murder flashes in Veronica's mind and she wonders if she's going bonkers. Up until now her supernatural skills consisted of a few botched love spells.
Using her sexy voice and pin-up style has paid off, she's about to land a record deal. But suspicion soon turns to her when another vampire turns up as nothing more than a pile of ashes a vacuum would have a hard time sucking up. Veronica has to hone her paranormal powers or lose her deal and possibly her life.
When an utterly delicious mystery man steps in as the new bass player, Veronica can't figure out if he's there to help or cause more problems. What she does know is she can't resist his good looks and sex appeal. She wonders if they'd make rockin' music together. But helping the undead could stop her from finding out and leave Veronica dead permanently.
Review:
I received Rock ´n’ Roll is Undead in exchange of an honest review and I have to say it was nice getting to read about a world where humans are well aware of the existence of paranormal creatures and actually live side by side with them.
Veronica Mason is a lead singer of her Rockabilly band – The Voodoo Zombies.
Veronica’s also a witch and the other members of her band are vampires! They all get along moderately well even though their kinds should be enemies. When one of her band members is staked and dies Veronica is forced to find a new bass player. Buzz auditions for the place and gets it and Veronica is definitely interested in more than just his musical abilities.
Rock ´n´ Roll is Undead is definitely not your typical paranormal story. There’s a good twist to it and all the characters, especially Veronica who’s a witch who can’t perform spells, are very funny. Some of the characters can be a bit creepy sometimes as well. I think the characters and their relationships with each other could have been a little more developed, though.
The whole book is fast paced and there’s a very good mystery you’ll want to figure out. I think the end of the book might surprise you. It took me a while to figure out who the killer was but I eventually did.
All in all Rock ´n´ Roll is Undead is an interesting paranormal romance story with a good mystery in it. It is fast paced and I think it will be able to keep paranormal fans entertained.
Rating: Worth Your Time and Must Read (4 Stars)
Goodreads
Giveaway:

- Comment on this post to be entered to win an e-copy of Rock ´n´ Roll is Undead.
- Please leave your name and a way to contact you!
- I'll pick a winner on Sunday (August 28th)
- This is International