Review - Love Is The Higher Law by David Levithan 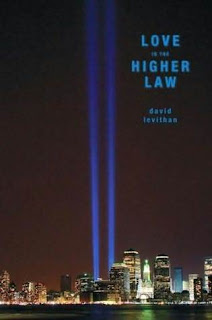 Summary:
First there is a Before, and then there is an After. . . .

The lives of three teens—Claire, Jasper, and Peter—are altered forever on September 11, 2001. Claire, a high school junior, has to get to her younger brother in his classroom. Jasper, a college sophomore from Brooklyn, wakes to his parents’ frantic calls from Korea, wondering if he’s okay. Peter, a classmate of Claire’s, has to make his way back to school as everything happens around him.

Here are three teens whose intertwining lives are reshaped by this catastrophic event. As each gets to know the other, their moments become wound around each other’s in a way that leads to new understandings, new friendships, and new levels of awareness for the world around them and the people close by.

David Levithan has written a novel of loss and grief, but also one of hope and redemption as his characters slowly learn to move forward in their lives, despite being changed forever.
Review:
This was the first David Levithan I read and I’m glad I did. In this book Levithan tells the story of three teenagers living in New York on 9/11 and the effect the day had on them.
Claire lives close to the World Trade center and on the morning of 9/11 she’s in school. She helps taking care of the little kids and her brother in the elementary school as she waits for her mother to show up.
Peter is waiting for a record store to open so he can buy a cd when the attacks happen.
Jasper is sleeping.
Love is the Higher Law is about dealing with events that somehow or another change your life. I’m not American but I do remember where I was and what I was doing when I found out about the attacks. Like most people I saw the second plane hit the tower on life TV. In my opinion, it’s important to remember 9/11 so we can learn. History has a way of repeating itself, after all.
I found this book incredibly moving and captivating. The characters emotions are very raw and you can’t help experiencing the events of 9/11 and the aftermath of that day with them.
One think I really like was the three different points of views and the three different time periods (before, during and after) present in the book. Levithan is able to explore the after perfectly, giving enface to the necessity of moving on even after a terrible event.
The book is beautifully written. I would recommend this book to anyone who is interested in understanding the emotions brewing inside of people on 9/11.
Rating: Must Read
Good Reads
Book Depository
Posted by Carla at 11:37 PM