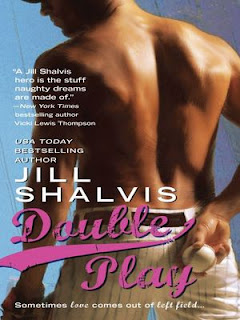 Summary
He's a great pitcher...and a great catch.
With the end of his career looming, the last thing ace pitcher Pace Martin needs is a distraction, even if it comes in the form of a tough, beautiful, tell-it-like-it-is writer who sees past his defenses.
Review:
Yes, I am reviewing another Jill Shalvis book and Guess what? I really liked this one as well.  I really like her writing style and the way she develops her characters.
This time around the plot is centered on Pace Martin, Pacific Heat’s team ace pitcher, who’s trying to lead  the team to their first winning season while battle ling a shoulder injury. It also centers on Holly Hutchins a reporter hired to write a series of articles on the Heat and to expose the team’s secrets. She immediately senses that Pace is hiding something and, obviously, sparks start to fly between them.
Pace is an amazing male lead. I seriously have a fictional crush on him! :P He’s strong and sexy but he tends  not to show his feelings and keep them close to his chest. He knew when to let go, though. The truth is he’s a softy with strong morals and beliefs. I think he was also a bit stubborn but that only made him more interesting.
Holly was a great character as well. Just like Pace she keeps things to herself. She liked everything to be on its place. She’s curious and honest and proved herself to be loyal as well. She also has a talent for digging up secrets.
Pace and Holly’s relationship developed nicely. It blossomed in a way that made it seem real. They had to overcome some problems but the pull between them always seemed just too great for them not to be together.
All in all I really enjoyed this book. The characters are great and the plot is interesting. I couldn’t help but to feel connected to Pace and Holly. Plus, if you like baseball I’m sure you’ll like the Heat team.
Rating: Somewhere between Worth Your Time and Must Read (4 ½ Stars)

Goodreads
Use bookdepository to buy this or any other book and get 10% off when you use the code MAY11
Posted by Carla at 3:55 PM

Email ThisBlogThis!Share to TwitterShare to FacebookShare to Pinterest
Labels: book review, genre: contemporary romance, Jill Shalvis, rating: somewhere between well worth your time and must read