Review - The Betrayal by Sheila Hendrix 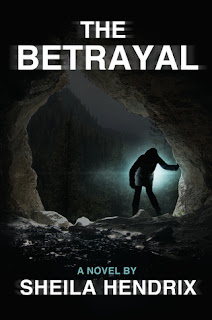 Summary:
One brother races against time to save the other before it's too late. When Matt has a dream, it sends two brothers on a hunt for a cave. Matt doesn't know why they have to go there; he just knows they have to go. When they arrive, Matt finds out that the vision turns out to be a trap. A Darkness like no other wants to control Matt and kill Zack. When a demon asks Zack a question, "How far will you go to save your brother," Zack replies, "As far as I have to." Now something like they've never faced before is on a deadly mission to destroy everything the brothers hold dear and if they are not careful, neither of them will be able to escape. (goodreads)
Review:
Zack and Matt are brothers who were abandoned by their parents at a very young age. They’ve been drawn into a life of demon hunting.
Matt has supernatural powers and so it is up to his older brother Zack to protect him from a demon who wants to use Matt’s power. The demon is determined to get the powers he wants no matter what and is up to Zack to save Matt.
The Betrayal is the first book  in the Dark Circle series and in it the brothers are led to a mysterious cave. It is a little darker than most YA Paranormal novels.
As the main characters Matt and Zach are well-written. They’re good people dealing with a hard past. They’re likeable characters and the bond between them is palpable. I liked the way they dealt with each other. I am a sucker for the protective type so Zach deifnitely won me over.
The betrayal is a fast read. It is well written even thought it dragged on sometimes and the descriptions of the imagery is wonderful. It did remind me of the TV Show Supernatural, which I enjoy watching very much.
All in all this was an enjoyable story. I would’ve liked a little more action, especially in the beginning, and more information about the boy’s past but in the end I was able to get involved in the story.
If you like YA Paranormal stories, you might like this one.
Rating: Readable
Thank You Tracee from Pump Up Your Book Promotions for the opportunity to review this book.
Goodreads