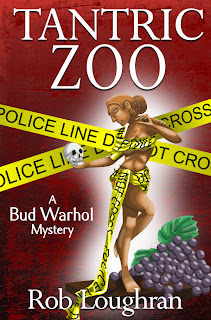 Summary:
Tantric Zoo begins at a tantric sex couples retreat in 1987. Amid the cavorting and indulging and groping and exploring one of the campers ends up dead. The surviving campers bury the body and return to their lives.
Until 2008 when the body is discovered and forensic anthropologist Bud Warhol tracks the campers down. Bud finds the murderer but also discovers how two decades of guilt has altered and affected the lives of everyone involved with the Tantric Zoo.

Review:
Tantric Zoo was sent to me by the author in exchange of an honest review.
The book begins in 1987 at Tantricity Hill, where four different couples at different stages of their lives are. Tantricity Hill is a retreat that focuses on sex therapy run by Altair and Apple. It specializes in trying to make the campers connect to themselves and their significant others.
During the first part of the book we get to meet the campers at Tantricity Hill and their history. Everything seems to be going okay at first but when one of the campers turns up dead after a drug filled orgy in the dark, the remaining campers decide to bury the body.
Twenty one years later when that boy is found we get to know Bud Warhol. He is an anthropologist who works with the police and he’s determined to find out who the body belongs to and why he was killed.
Tantric Zoo is a very interesting and different read.
I liked the fact all the campers have different stories and reasons to be at Tantricity Hill. It was nice getting to know them.
I really liked Bud as well. He was smart and resourceful and was able to find everyone involved in the murder rather quickly. All the campers were involved in the cover up but only one of them was the murdered and it was nice trying to find out which one of them it was.
All in all, Tantric Zoo is a very well written, different and entertaining book that I enjoyed. If you like mystery, you might like this book!
Rating: Somewhere between Worth Your Time and Must Read (4 ½ Stars)
Goodreads
Posted by Carla at 3:29 PM

Email ThisBlogThis!Share to TwitterShare to FacebookShare to Pinterest
Labels: book review, genre: mystery/thriller, rating: somewhere between well worth your time and must read, Rob Loughran