Review - The Your Heart Will Be Also by Felicia Rogers 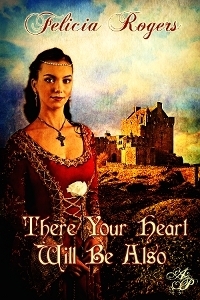 Summary:
Only daughter of an English lord, Sarra of Greenbriar, is used to getting her way. So when her father passes and the King begins sending suitors, she feels justified in taking matters into her own hands. Through a series of harmless pranks, Sarra works to keep the potential husbands at bay.
Cedric MacNeil is a Scotsman that has lost it all. Death claimed his parents and jealousy claimed his entitled position as Laird of his clan. Since his mother was a familiar of the English court, he leaves his native land and heads to England to fight on behalf of the English King. Tournaments are won, earning honor and glory for the crown. Cedric’s reward is the opportunity to gain what he wants most in this life, land.
But as he gets to know Sarra, he realizes he might get more than he bargained for.
Review:
I received There Your Heart Will Be Also from the author in exchange of an honest review and it turned out to be a delightful historical book.
As the only daughter of an English Lord Sarra is used to getting what she wants so when her father dies and the King starts sending suitors her way she’s sure she can handle it and take matters into her on hands.
When a Scottish nobleman named Cedric comes along, Sarra’s plans might just backfire, though.
I found this book to be very entertaining. The characters and setting are great and the author is able to make the readers feel like they really are in 16th century England.
I liked the main characters and thought they were strong and believable as well. The plot and action in the story developed well.
All in all this is a great read for any historical romance fans. The book is well-written and the story is able to keep you entertained and interested.
Rating: Worth Your Time ( 4 Stars)
Goodreads
Posted by Carla at 9:45 PM