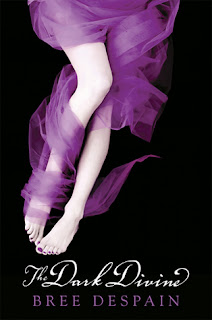 Summary:
Grace Divine—daughter of the local pastor—always knew something terrible happened the night Daniel Kalbi disappeared and her brother Jude came home covered in his own blood.
Now that Daniel's returned, Grace must choose between her growing attraction to him and her loyalty to her brother.
As Grace gets closer to Daniel, she learns the truth about that mysterious night and how to save the ones she loves, but it might cost her the one thing she cherishes most: her soul. (goodreads.com)
Review:
This book turned out to be a good surprise, even though I already had a pretty good idea of what it was all about.
Grace’s family members are the good doers in their community. They are respected, well intentioned and hold no secrets. Or at least that was what Grace thought until a childhood friend, Daniel, who had disappeared several years ago, returns.
When Daniel returns everything around Grace seems to change. She had always been close to her brother Jude but suddenly their relationship becomes strained. People in the community start showing up dead and she is warned to stay away from Daniel.
She doesn’t, though. She always had a crush on him and that crush only seems to grow stronger. There’s something about him that pulls her in, even if she doesn’t know exactly what he is up to most of the times.
Grace is a good main character. She was a little too much of a good girl for me sometimes, though, and I would’ve liked to see her interact a little more with other characters besides Daniel.
Daniel is one of those characters you can’t help being drawn to. He’s comes off as a bad boy you’ll want to keep learning more about as the story progresses and you realize what he’s been through. He’s the best character in the book, in my opinion.
There are some religious tones in this book that sometimes almost overpower the story but never actually do.
The book starts with a mystery that is slowly revealed and there are some good twists, which will make you keep reading just so you can find out what will happen next. Grace wants to make everything right in her family and with Daniel but her decisions have a cost and not everyone is exactly who they seem to be.
The characters were well written and so was the plot, even though it got a little unsteady sometimes. I appreciated the fact that Grace’s life didn’t completely stop because she found herself in love. It was a nice change from some books in which all the main character seems to be able to do is think about and swoon over her new boyfriend. Of course Grace did swoon a little but the romance was written in an interesting and captivating way.
All in all, I quite enjoyed this book even though I’m still not completely sure how I feel about the end and how things turned out for Daniel. I can’t wait to read the Lost Saint now and see what happens next.
After her mother and father's divorce, Zoey is determined to live the perfect life, everything and everyone in it's place. However, when her mother attempts suicide Zoey's world is thrown out of whack. To further complicate matters, Zoey is in an accident and can't remember what happened the night it happened. But she needs to remember and fast, because when she wakes up her love life is upside down.

Things that irked me about the novel: I had a hard time sympathizing with Zoey at ti ...more
Rating: Somewhere between Readable and Well Worth Your time (3 ½  stars)