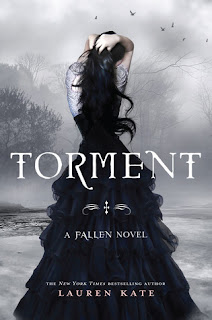 Summary:
Hell on earth.
That’s what it’s like for Luce to be apart from her fallen angel boyfriend, Daniel.
It took them an eternity to find one another, but now he has told her he must go away. Just long enough to hunt down the Outcasts—immortals who want to kill Luce. Daniel hides Luce at Shoreline, a school on the rocky California coast with unusually gifted students: Nephilim, the offspring of fallen angels and humans.
At Shoreline, Luce learns what the Shadows are, and how she can use them as windows to her previous lives. Yet the more Luce learns, the more she suspects that Daniel hasn’t told her everything. He’s hiding something—something dangerous.
What if Daniel’s version of the past isn’t actually true? What if Luce is really meant to be with someone else?
.
Review:
After reading Fallen I confess I was curious to find out what would happen in Torment. I thought Fallen was okay and I did enjoy a few parts but I was a little apprehensive when it came to reading Torment. I ended up enjoying it more than I did Fallen.
It was nice going back into Luce’s world and I was happy to see characters like Arriane and Cam were still around. I also liked the newly introduced characters like Francesca, Steven, Miles and Shelby. I think they all brought something new to the story, especially considering some of those characters fall into different sides of the good and bad spectrum.
Unfortunately while I liked these new characters, I found myself not feeling the same about Luce and Daniel sometimes.
Daniel became a little demanding and even controlling. Why couldn’t he talk to Luce and explain a little of what was going on to her? I still felt bad for him at one time. It’s not that I don’t like Daniel, because I do but he and Luce definitely have to learn how to communicate.
When it comes to Luce I feel like she was just lost during the whole story. In the first novel I admired her ability to solve the mysteries surrounding her but in Torment I felt like she had lost that ability. I would’ve liked her more if she hadn’t been so clueless even though I do understand why she felt confused. I’m sure she’ll get back to being strong in the next book.
Again, I really do think Luce and Daniel need to learn how to talk and be honest to each other.
What I liked about this book was the fact some demons were portrayed as regular and normal people who simply have different perspectives and believe in different things. The relationship between Francesca and Steven was very interesting.
I also enjoyed the change of scenery. I think Lauren Kate created a great new school that was very well described.
I liked Lauren Kate’s writing in this book. It’s smooth and interesting. There are good scenery and details descriptions as well as good portrayals of the character’s feelings.
All in all, Torment was an interesting and fun read. I just wish Luce and Daniel had managed to strengthen their relationship instead of drifting apart.
If you liked Fallen, I’m sure you’ll enjoy Torment as well. I’ll definitely have to go read Passion now so I can find out what happens between Luce and Daniel.
Rating: Somewhere Between Readable and Worth Your Time (3 ½ Stars)
Goodreads
Bookdepository
Posted by Carla at 5:05 PM