Review - The Jinx by D.F. Lamont 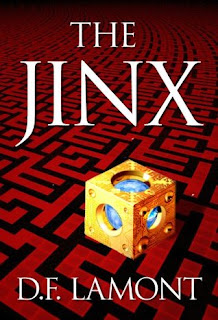 Summary:
The Jinx is the story of Stephen Grayson, a 13-year old whose run of bad luck gets so bad he worries he is endangering his family. Fearing he is cursed, he flees home to protect his family, only to find that he is in the middle of a tug-of war between a cult obsessed with order and misshapen monsters known as “Chaons” who seem bent on hunting him down.
Review:
I received the Jinx from the author in exchange of an honest review and I have to say this was a fun book.
Thirteen year-old Stephen’s bad luck is so extreme he is sure it is putting his family in danger. After an accident in which his family is hurt and he escapes almost without any scratches, he decides to run away in order to protect them.
After leaving his town and family, the bus Stephen’s on is taken over by strange creatures and he ends up being taken by a bizarre cult that wants to use him in order to make their plans come true.
After being saved Stephen and his savior devise a plan to defeat the cult and make sure the universe remains in balance.
I enjoyed The Jinx. It is a fun and fast paced read. The author is able to create interesting situations that kept me entertained and to explain the chaos theory in an understandable way.
The characters are all well-developed and interesting in their own way.
All in all this a good book and I think the author did a good job when it comes to making it suitable for middle-grade kids. I would definitely recommend this book to any reader who enjoys a good sci-fi story.
Rating: Worth Your Time a (4 Stars)
Goodreads
Posted by Carla at 10:21 PM