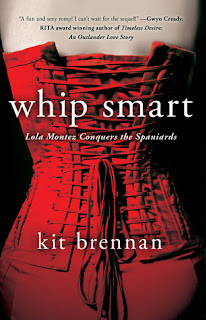 Summary:
A wild and sexy romp through history based on the real-life adventures of the audacious, Lola Montez. It is 1842, London, and the gorgeous, ever-capricious 22-year-old Eliza Gilbert, (aka Lola Montez) is in deep trouble and seeks escape from a divorce trial. Desperate to be free, Lola accepts an alluring offer of a paid trip to Spain, if she will only fulfill a few tasks for Juan de Grimaldi—a Spanish theatre impresario who is also a government agent and spy for the exiled Spanish queen, Maria Cristina. Lola soon finds herself in Madrid, undercover as a performer in a musical play. But when she falls dangerously in love with the target, General Diego de Léon, Lola becomes a double agent and the two hatch a plot of their own. Disaster strikes when the plot is exposed, Diego is captured, and Lola is forced to flee on horseback to France, with a dangerous group of Loyalists in hot pursuit.

Review:
I have received this book from the author/publisher in exchange of an honest review.
First of all, don’t be fooled by the cover. This is not an erotic book. I know some people thought it was when they saw the cover but it really isn’t.
Whip Smart is the story of Eliza Gilbert aka Lila Montez and how in 1842 receives a proposition to spy on the Spanish royalty. As she becomes a spy she finds herself in the middle of a dangerous political turmoil.
Lola is a good main character. She’s impulsive, strong and bold and feels like she doesn’t exactly fit in a restrictive world. I really liked her enjoyed reading about her adventures.
The story is fast-paced and interesting and there’s never a dull moment. There’s also a romance that I quite enjoyed.
I had never heard of Lola Montez before but she was definitely a real person that lived in the 19th century. Whether she was spy or not, is debatable of course, but I enjoyed reading and finding out more about her.
All in all, Whip Smart is an interesting book with lots of suspense, danger and some romance. The book is well-written and the characters and situations intriguing.
If you enjoyed a good historical book with an espionage element, you might want to give this book a try!