Review - Can You Keep a Secret by Sophie Kinsella 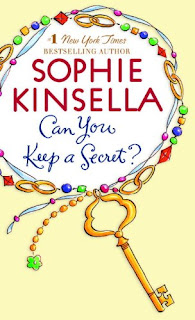 Summary:
Meet Emma Corrigan, a young woman with a huge heart, an irrepressible spirit, and a few little secrets: Secrets from her boyfriend: I’ve always thought Connor looks a bit like Ken. As in Barbie and Ken. Secrets from her mother: I lost my virginity in the spare bedroom with Danny Nussbaum while Mum and Dad were downstairs watching Ben-Hur. Secrets she wouldn’t share with anyone in the world: I have no idea what NATO stands for. Or even what it is. Until she spills them all to a handsome stranger on a plane. At least, she thought he was a stranger.…Until Emma comes face-to-face with Jack Harper, the company’s elusive CEO, a man who knows every single humiliating detail about her.
Review:
Can you Keep a Secret is a fun, fast read that will keep you entertained right from the start.
Emma Corrigan has been working for Panther Cola Company for a year and is expecting to be promoted. Unfortunately things don’t go exactly as she expected. She ends up messing a business meeting and on her return flight she ends up confession all her secrets to the stranger sitting beside her.
Much to her horror that stranger turns out to be Jack Harper, American CEO of Panther Cola and her boss, a mysterious man who now knows all her most embarrassing secrets.
Emma is a great, relatable character. She’s been through a string of bad luck but she’s always extremely funny. She herself says she can sometimes be a moron but even when she is she’s still likeable and even hilarious. Her character develops nicely as the story goes own and she deals with her problems.
Jack Harper is also a great character. He’ mysterious but he’s also well intended. He’s romantic and funny and able to tease Emma like no one else. He finds himself in love with the strangest woman he ever met and he is completely fascinated by her.
The secondary characters are very convincing as well, especially Lissy, Emma’s best friend who is smart and hard-working and just a little insecure.
Emma and Jack’s romance develops well and as you read you find yourself rooting for them. They balance each other well even though Jack really screws up at some point.
This is a well-written, funny and easy to read book. The plot is quite simple but it develops in an interesting way without being forced.
Sophie Kinsella is able to make you feel connected with the characters and want to laugh and cry with them.
Any fan of chick lit and contemporary romance will definitely enjoy this book.
Rating: Worth Your Time
Goodreads
Book Depository
Posted by Carla at 2:39 PM