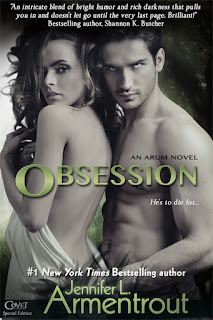 Summary:
He’s arrogant, domineering, and... To. Die. For.
Hunter is a ruthless killer. And the Department of Defense has him firmly in their grasp, which usually doesn’t chafe too badly because he gets to kill bad guys. Most of the time he enjoys his job. That is, until he’s saddled with something he’s never had to do before: protect a human from his mortal enemy.
Serena Cross didn’t believe her best friend when she claimed to have seen the son of a powerful senator turn into something... unnatural. Who would? But then she witnesses her friend’s murder at the hands of what can only be an alien, thrusting her into a world that will kill to protect their secret.
Hunter stirs Serena’s temper and her lust despite their differences. Soon he’s doing the unthinkable—breaking the rules he’s lived by, going against the government to keep Serena safe. But are the aliens and the government the biggest threats to Serena’s life… or is it Hunter?
Review:
I’m a big fan of Jennifer L. Armentrout/ J. Lynn and have enjoyed all her books so far so I definitely had to read Obsession. The book did not disappoint me. I knew the relationship between Serena and Hunter would be intense and it surely was.
After witnessing her friend – who swore she had seen the son of a senator turn into something not human - be murdered by an alien, Serena is thrown into the middle of a world and a war she knows nothing about.
Hunter is not happy he has to babysit a human but as they spend more and more time together, things between them start to change. Too bad there are aliens and human after Serena and the secrets she might or might not know.
Serena Cross is the main character and I really liked her. She’s thrown into an unexpected and, let’s face it, weird situation but she never really breaks down. She’s feisty, strong, resilient, witty and smart. I loved the fact she didn’t cower away from Hunter, instead she answered back. This doesn’t mean she wasn’t aware he could be dangerous even to her – she was – she simply refused to let him intimidate her.
Hunter is a wonderful character as well. He’s dark, mysterious, dangerous, sexy and sensual. He’s definitely rough around the edges, sarcastic, witty and absolutely cocky. He manages to be worse than Daemon! Hunter doesn’t try to hide who he is and he is almost brutally honest. He changes a little as the story develops and the readers – and Hunter himself – start to realize he’s not as cold as he thinks he is. Serena manages to bring out the best in him including his protectiveness.
I really enjoyed the way the relationship between Serena and Hunter developed. They were immediately attracted to each other but there was still some built up to their relationship. Hunter went from being annoyed by the fact he had to ‘babysit’ Serena to wanting to sleep with her, to wanting her for more than just sex. The fact Serena is a feisty woman means they fit perfectly.
Plus, the intimate scenes between them are absolutely hot!
When it comes to the plot, I really enjoyed this glimpse at the life of an Arum. There are two sides to every story and getting to know the Arum’s was really interesting.
All in all, the plot of Obsession is fast-paced and quite interesting. The story is well-written and the characters are great.
I really enjoyed Obsession and this more mature look into the Lux series. You should definitely check this book out!