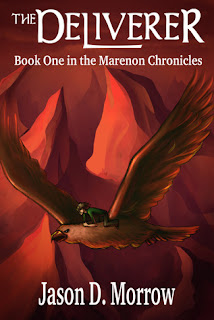 Summary:
Prophecies are not always clear. That is what seventeen-year-old Silas Ainsley learns when he finds himself in a realm called Marenon. The people of Marenon are nearing the brink of war and many of them claim that Silas is the fulfillment of an ancient prophecy. Each group wants to use him for their own purposes, and he doesn't know who is trustworthy. With the help of a lawless band of mercenaries, Silas must journey to uncover the meaning of the prophecy before Marenon falls to ruin. The only way to get to Marenon is to die, and Silas has just arrived.

Review:
I received this book from the author in exchange of an honest review.
Silas Ainsley has always believed he was just another normal guy.  After a series of strange events happen and strangers show up at his doorstep, it becomes clear he’s not just a normal guy and that nothing would ever be the same again.
Silas quickly discovers his life and his death are the key to saving a world called Marenon from destruction.  The only problem is: the only way to save Marenon is for Silas to die.
The main characters in this book are interesting and go through some development as the story unfolds. They have to make important decisions and deal with some moral issues. Even if the decisions they make are often emotional and not rational, I still enjoyed reading about them.
While the book starts slow it quickly picks up pace. There’s a lot of adventure and action surrounding Silas.
When it comes to the world of Marenon, I think the author did a good job setting it up. A world set somewhere between life and death is a very interesting idea and it brought up several good questions while setting up the difference between good and evil.
All in all, The Deliverer is an interesting book that includes action, adventure, some violence and killings. The plot can be a little predictable but the characters are well developed and the world created interesting.
If you like an interesting fantasy, you might enjoy this story.

Goodreads
Posted by Carla at 12:11 AM