Blog Tour: Living In The Aftermath by K.A Coleman

Blog Tour: Living In The Aftermath by K.A Coleman 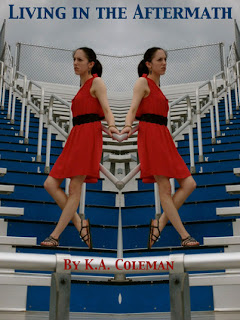 Book Description:
At the start of her junior year, Savannah had it all: popularity, money, cheerleading, a boyfriend, and a best friend. Unfortunately, when you have it all, you risk losing everything. After a tragic accident forever changes her life and the lives of her friends, Savannah finds herself faced with a decision to make. She can try to slip back into her old life, flaws and all, or she can try to redefine herself for her last year of high school. Is it even possible that Savannah can change after having everything go her way for 18 years?
Jacob has nothing to lose. He has seen one too many schools and wants nothing more than to graduate, so he can finally stay in one place for more than a year. In fact, Jacob thinks he has every clique and student pegged after switching schools so frequently. When Jacob finds himself face to face with Savannah, he realizes that she doesn’t quite fit into one of the high school stereotypes.
In fact, they’re both harboring rather big secrets. Maintaining a friendship or any kind of relationship can be akin to balancing on the thinnest of tight ropes. When the rope is made of lies, revenge, and half-truths, well, it’s only a matter of time before everything and everyone comes crashing down.

I'm not really going to write a biography. Though I am supportive of the high schools and colleges I have attended, it's probably not actually the most interesting stuff about me. I'm going to do a list of five really random things instead for now.

1) I like making lists. It's weird, and I never actually scratch things off of the list.
2) I sing and dance in the car like a maniac.
3) For the first six years of my life, I truly believed a shark lived under my bed. I watched Jaws at too young of an age.
4) Without a doubt, I am a night person. I am enormously grumpy when first woken up in the morning.
5) When I was younger, I read almost every Nancy Drew book, both new and old. I had a notebook, and I would take notes to see if I could figure out who the "bad guy" was before Nancy did. We probably tied.