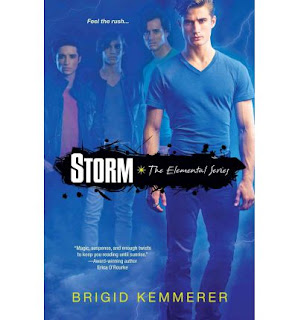 Summary:
Earth, Fire, Air, Water – they have more power than you dream.

Ever since her ex-boyfriend spread those lies about her, Becca Chandler is suddenly getting all the guys—all the ones she doesn't want. Then she saves Chris Merrick from a beating in the school parking lot. Chris is different. Way different: he can control water—just like his brothers can control fire, wind, and earth. They’re powerful. Dangerous. Marked for death.
And now that she knows the truth, so is Becca.
Secrets are hard to keep when your life’s at stake. When Hunter, the mysterious new kid around school, turns up with a talent for being in the wrong place at the right time, Becca thinks she can trust him. But then Hunter goes head-to-head with Chris, and Becca wonders who’s hiding the most dangerous truth of all.
The storm is coming . .

Review:
Judging by the blurb I thought this could be an interesting book, I just didn’t expect to like it as much as I did. Storm is definitely more than just interesting! It is a wonderful and very entertaining read.
Storm starts with Becca saving Chris Merrick’s life after he’s attacked by some guys. After that Becca quickly realizes there’s something different about Chris and his brothers. They seem to be able to do things other people can’t and they are being targeted because of how powerful they are. As Becca unravels the mystery surrounding the Merrick brothers and tries to deal with her feelings for Chris and Hunter – the new student at school - she quickly realizes she’s not completely safe either.
Becca is a wonderful bad-ass main character. She’s strong and determined bus she’s still vulnerable in a way that makes her incredibly easy to like and relate to. I think the way she reacted to the things that happened to her was very believable and understandable.
Chris is a very good characters as well. His element is water and he stills has a few things to learn when it comes to controlling it, but it’s obvious he has a deep connection with it.  He’s sweet kind and it’s obvious he cares for his family. I think what I really like about Chris is the fact that, despite everything, he’s actually very normal. He’s not perfect. He gets angry and makes stupid mistakes as well.
Hunter, the new kid, is very mysterious and interesting, I think. He’s a god guy, dealing with the loss of his father.
Of course I have to mention the other Merrick brothers here because they are just great. Each one of them is very unique and well developed. The relationship between them is not exactly an easy one but their banter is definitely amusing. Michael is the oldest brother. He controls earth and he’s the one who shoulders all the responsibility of raising is brothers and making sure they are safe. He can seem like a jerk in the beginning of the book but if you read Elemental you’ll understand why he’s like that. Then there are the twins Gabriel and Nick. Gabriel controls fire and he’s definitely unpredictable, a smooth talker and funny. Nick controls air and he’s the peace maker of the family.
I really enjoyed the plot of this book. There’s action, adventure and a little bit of mystery and a sweet romance.
All in all, I though Storm was a highly entertaining and captivating read. The book is well-written, the characters are very well-developed and the plot has some nice twists and turns.
With a great main character, four hot and intriguing brothers who can control the elements and an interesting and well-developed plot, Storm is definitely a must read for any Young Adult Paranormal fan. I can’t wait for the next book in the series!

Rating: Somewhere Between Worth Your Time and Must Read ( 4 ½ Stars)