Review - BaSatai: Inside Out by Suzan Battah 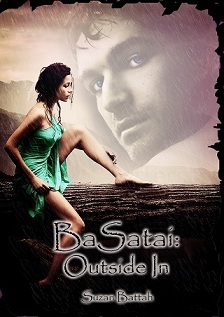 Summary:
Seventeen year old, Armani Radnelaq a full blooded BaSatai is plagued by a curse in her blood. A curse created from hate and designed to break the divide between two parallel worlds of Earth and H-trae when Armani's blood is spilled in attack and she dies.
S'teuqoubs have been travelling back and forth across the divide for centuries without trouble. The BaSatai and Guardians monitoring activity and enforcing rules to ensure peace and harmony but if the divide splits and opens, a much greater number of supernatural S’teuqoubs will filter into earth destroying equilibrium which the BaSatai and Guardians will be unable to control. Humanity and the BaSatai will suffer and perish. The parallel divide must remain secure at all costs.
Armani has remained hidden on earth with her adopted father Elijah since her birth. She has been raised in the human way and fights her natural instinct to evolve into a BaSatai. The BaSatai in her requires her to evolve and shift, use her powers and strength. Yet Armani is freaked out by the need to shift. She smokes, has a bad attitude, must deal with aggressive bullies and control her natural BaSatai instinct. Her Guardian with BaSatai Warriors are coming for her. She refuses to accept her fate and doesn't believe any BaSatai should die to protect her.
The blood curse maturing in her veins makes her a target for her enemies. Her Guardian Karhl and an elite BasSatai Warrior Rafael are the first to arrive and prepare her for her crossing over. Her attraction to Rafael complicates her purpose to stay on earth even more. They both insist she fall into line and follow their lead but she is not ready to leave earth just yet..

Review:
I received this book from the author in exchange of an honest review.
In this book we meet Armani, whose blood is cursed, making her the target of some very deadly enemies. She doesn’t want to accept it and hides on Earth with her adopted father. When a guardian and a warrior arrive to protect her and train her, teaching her to use her BaSatai powers, she finally has to accept who she is.
Armani is a good character. She’s very stubborn and strong. She never allows the fact her blood is cursed to take over her life, which I really appreciated. She faces some difficult situations but never backs down.
Karhl, Armani’s guardian, and Rafael were very interesting characters as well. Karhl is sarcastic, funny and extremely confident. Rafael is extremely protective of Armani and willing to do anything to keep her safe. He wants to be with her but she knows that will mean he won’t hesitate to sacrifice himself for her.
I enjoyed the way the relationship between Armani and Rafael developed. I never quite knew where their relationship was going.
The author was able to create and interesting world in this story which includes several supernatural creatures. The book is well-written and well-paced, even though it can get a little too slow every now and then.
All in all, this is a good and exciting book. There’s a lot of action and some romance and the world created by the author was very interesting.
If you enjoy Young Adult Paranormal book, you might enjoy this book.

Goodreads
Posted by Carla at 3:20 PM