Review - Daughter of the Goddess by Rita Webb 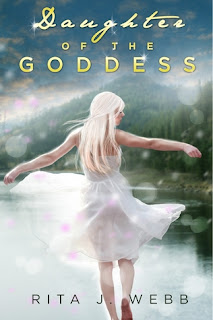 Summary:
The Heart.
The God of Love seeks a bride who is pure in heart and full of life—full of soul. Instead of a woman, he finds a child with laughter in her heart. Waiting for her to grow up, he befriends her, pretending to be nothing more than a blue-eyed boy with wild, tangled hair.
The Soul.
Left on the temple doorstep, a young girl turns the lives of the priestesses upside down . . . until one summer day before her eighteenth birthday, a traveling oracle tells her she is to marry a stranger in a foreign land.
The Nightmare.
An ancient demon—half-man, half-snake—wants to destroy anything the gods love. When she was a child, he haunted her dreams, but now he stalks her across the countryside. If he catches her, he’ll devour her.

Review:
I have received this book from the author in exchange of an honest review and this turned out to be a short but interesting story.
Daughter of the Goddess is a short story with and interesting main character. It is the story of Peaches, a girl who has had a very difficult life until she is taken in as a daughter by the Goddess. The Goddess educates Peaches until she is 18, when Peaches begins a journey to a foreign land with the intent to find the marry she is supposed to marry.
Her journey is not easy and is made even more difficult by Naga, an enemy of the Goddess.
Peaches is a good character. She’s well developed and is easy to like her and want things to work out for her.
I know this is a short story but I would have liked to learn more about the world created and about the Goddess as well. Still, the whole storyline was very intriguing and imaginative.
All in all, Daughter of the Goddess is an interesting read. It is short, fast-paced, well—written and with a good main character. I think the author dis a very good job telling the story of Peaches in only a few pages.
If you like a good fantasy story, you might enjoy this one.

Rating: Somewhere between Readable and Worth Your Time (3 ½ Stars)

Goodreads
Posted by Carla at 9:08 PM