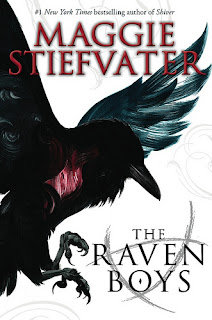 Summary:
“There are only two reasons a non-seer would see a spirit on St. Mark’s Eve,” Neeve said. “Either you’re his true love . . . or you killed him.”

It is freezing in the churchyard, even before the dead arrive.
Every year, Blue Sargent stands next to her clairvoyant mother as the soon-to-be dead walk past. Blue herself never sees them—not until this year, when a boy emerges from the dark and speaks directly to her.
His name is Gansey, and Blue soon discovers that he is a rich student at Aglionby, the local private school. Blue has a policy of staying away from Aglionby boys. Known as Raven Boys, they can only mean trouble.
But Blue is drawn to Gansey, in a way she can’t entirely explain. He has it all—family money, good looks, devoted friends—but he’s looking for much more than that. He is on a quest that has encompassed three other Raven Boys: Adam, the scholarship student who resents all the privilege around him; Ronan, the fierce soul who ranges from anger to despair; and Noah, the taciturn watcher of the four, who notices many things but says very little.
For as long as she can remember, Blue has been warned that she will cause her true love to die. She never thought this would be a problem. But now, as her life becomes caught up in the strange and sinister world of the Raven Boys, she’s not so sure anymore.

Review:
I wasn’t sure what to expect when I first picked The Raven Boys up. I was curious but didn’t know if I would like the story. It turns out I not only did like the story, I            loved it and couldn’t put the book down.
Blue Sargeant lives among psychics and clairvoyants but while she doesn’t share her family’s gift, she seems to make everything clearer for the clairvoyants.
When on St. Mark’s Eve she is standing in a cemitary with her aunt waiting for the soon to be dead to show up, she sees the spirit of a boy. That boys name is Gasney and he is going to be dead within a year.
Having never seen a spirit before Blue is told by her aunt that: “There are only two reasons a non-seer would see a spirit on St. Mark's Eve, Blue. Either you're his true love...or you killed him."
Don’t start reading this book expecting a lot of romance. I know the book summary makes it seem like the romance between Blue and Gasney is the focus of the story, it really isn’t. The focus is on the Raven Boys themselves and the relationship between them. The friendships between them were so, complex and dynamic that I couldn’t help but to want to be part of the group.
The characters in this book are all very unique and different.
Blue is our heroine and a very interesting character. She’s definitely unique, sensible and a little bit eccentric. Her family is full of psychics and Blue sometimes which she shared their powers. That’s why she’s immediately interested in the boys search, I think. She wants to be part of something special. She wants to find out magic really does exist.
I guess we can say Gasney is the main male character. He’s the leader of the pack and practically obsessed with finding Glendower – a historical Welsh King. Gasney is passionate about his search, determined and caring, especially when it comes to his friends. He’s a very well-written and complex character that kept me intrigued throughout the whole book.
Adam, Ronan and Noah are Gasney’s friends. Adam is very different from Gasney. He has a troubled life, is not reach and does his best to be able to go to Aglionby academy. He’s very smart and is the one who immediately shows and interest in Blue.
Noah is the quietest of them all. He’s a little awkward and very troubled. As the story develops the readers learn exactly why he’s like that.
Ronan is the friend with the huge anger issues. He’s father has died under some mysterious circumstances and Ronan can’t seem to get over it. He’s very rough around the edges and often acts like a jerk but there’s a soft side to him that is shown when he finds a baby raven and starts taking care of it. Ronan is one of my favorite characters and I know there’s a lot more to him than what meets the eye. I can’t wait to see what happens to him in the next book.
Even though I think the storyline was a bit of a back story to the relationships between the characters, I really enjoyed it. Getting to read about the boys and Blue looking for the ley lines and Glendower was extremely entertaining. Now that we already know the characters, I’m sure the next book will be more storyline focused.
All in all, I really enjoyed The Raven Boys. The characters are definitely the best part of the book but I also liked the plot. The book is well-written and made me feel like I was part of the quest.
When the book ended, I was left with several questions so I can’t wait for the next book in the series.
If you enjoy a good young adult paranormal/fantasy book with great characters, you should definitely give this book a try.