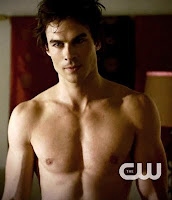 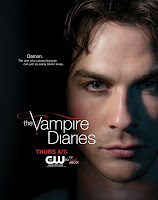 There is only one Damon. Dark. Handsome. Dangerous. Mysterious. With a dazzling smile. And his eyes, oh, those burning black eyes with stars inside which one could fall into.
He has his faults, too. He is menacing, arrogant and provocative; he mocks Stefan and makes his life miserable. But if you give him a chance, you see all of it is a façade behind which he is trying to hide how vulnerable he is. He pretends not to care, because he is afraid of being disappointed. However, he changes and grows, and reveals the wounded Damon behind the mask, the lonely Damon who only longs to be accepted and loved.
Damon always keeps his word. He is not a liar. He does not cover up for himself. Those kinds of things are beneath him; therefore, he tells the truth and takes responsibility for his actions. He has a sense of justice and redeems himself by trying to rectify the wrongs done even if they are not his fault.
Damon is a protector. He always looks after Stefan. He is loyal, he cares for his friends and helps them. He does not let anyone who hurts his loved ones get away with it. He risks everything for the people he cares about, including his health and life.
Damon is the one who understands Elena best. He sees past her appearance and notices her strength. He recognizes how different she feels from other people, how she is searching for something to be a part of, for somewhere to really belong. Damon pushes Elena to face the truth about herself, he makes her realize her potential and her desires, and he supports her at what she wants. He gives Elena credit for knowing her own mind, and he does not try to influence her decisions. He encourages her to make her own choices, and he respects them. Damon is always on Elena’s side.
He is gentle and loving. He is compassionate, and he hurts when his loved ones are in pain. He is also charming, graceful, courteous, and funny. He never ceases to surprise. In the end, Damon is simply just so … Damon. This is why I love him. This is why I am always on his team.
Pepca @ Beyond Strange New Words

Quotes:
“But before she could grasp it, he did something extraordinary. He caught her reaching hand, not roughly but gently, and held it in his cool slender fingers. Then he turned her hand over, bent his dark head, and kissed her palm.” (The Awakening and The Struggle, Elena and Damon, p. 137)
“I can waken things inside you that have been sleeping all your life.” (The Awakening and The Struggle, Damon, p. 205-6)
“Damon’s voice was no louder than before. ‘Get away from my brother.’  Bonnie could feel it inside him, a swell of Power like a tsunami.  He continued, so softly that Bonnie had to strain to hear him, ‘Before I tear your heart out.’” (The Fury and Dark Reunion, Damon and Klaus, p. 385)
“‘I’m yours to do what you please with,’ he said in the same stunned voice. ‘You can order me to die right now. After all my clever talk, it turns out that I’m the monster.’ And then he wept.” (Nightfall, Damon and Elena, p. 401)
“He was so gentle, but almost fierce in his love for her. He had vowed not to kill, but he would kill to save her. She was his most precious thing in all the world...Any sacrifice would be worth it if she were safe and free. His life meant nothing without her, so he would gladly give it, laughing and kissing his hand to her with his last breath […] ‘I don’t belong anywhere’, Damon pointed out, suddenly sounding sad.  ‘You know I’ll always be with you.’” (Shadow Souls, p. 110-12)
“‘You forgot all about me. You were holding me, but you completely forgot my existence...’
‘If only,’ he thought bitterly. ‘You’re branded on my soul.’” (Midnight, Elena and Damon, p. 26) 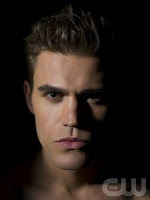 Quotes:
“Elena startled both of them by flying up so quickly that Stefan had to grab her by the waist to keep her from shooting toward the ceiling.
"I thought you had gravity!”
"So did I! What do I do?”
"Think heavy thoughts!”
"What if it doesn’t work?”
"We’ll buy you an anchor!”  ― L.J. Smith, Nightfall
“You're talking!"
"I know I am."
"And making sense!"
"Thank you kindly."
"And in sentences!"
"I've noticed." - Stefan and Elena”  ― L.J. Smith, Nightfall


Now that you've read a little bit about each of the guys in today's Team Smackdown is time to vote for your favorite!  The Team that wins today will face another Team in a future round!


I also have a little giveaway for you! 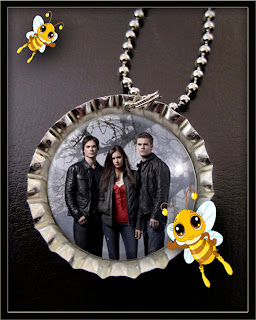