Review - In Honor by Jessi Kirby 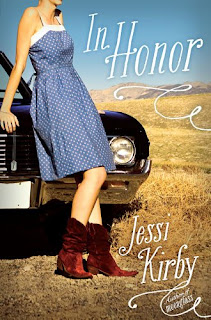 Summary:
Hours after her brother’s military funeral, Honor opens the last letter Finn ever sent. In her grief, she interprets his note as a final request and spontaneously decides to go to California to fulfill it.Honor gets as far as the driveway before running into Rusty, Finn’s best friend since third grade and his polar opposite. She hasn’t seen Rusty in ages, but it’s obvious he is as arrogant and stubborn as ever—not to mention drop-dead gorgeous. Despite Honor’s better judgment, the two set off together on a voyage from Texas to California. Along the way, they find small and sometimes surprising ways to ease their shared loss and honor Finn’s memory—but when shocking truths are revealed at the end of the road, will either of them be able to cope with the consequences.

Review:
I really enjoyed Jessi Kirby’s previous book Moonglass so when I learned about In Honor I knew I had to read it. The book did not dissapoint me at all. In fact, In Honor is one of the more touching books I’ve read in a long time.
Honor received a letter from her military brother after learning he has died in action. On the day of his funeral she finally decides to open that letter. The letter includes a surprise and a request. The surprise is that Honor’s brother somehow managed to get two tickets to see her favorite singer in concert. The request is for Honor to tell the singer about her handsome older brother.
In the spur of the moment Honor decides she’ll do exactly that. She’ll go on a road trip to the concert and tell the singer about her brother.
Her plans immediately don’t got according to plan, though. Rusty, her brother’s former best friend ends up joining her on her road trip despite the fact he’s the last person she wants to travel with.
Honor and Rausty were both great and interesting main characters. It’s Finn’s death has affected Honor deeply. He was the last member of her immediate family and someone she could always count on so she’s devastated. She’s trying to be strong and go on, though. The road trip she plans is the perfect way to honor her brother and do something fun and icnredible – something he would aprove. Honor’s emotions seemed real and I found it easy to like her.
Rusty also has a lot to deal with. Before Finn left, Rusty was incredibly mad at him and he now has to deal with the fact his best friend is gone for good. Rusty can be a jerk sometimes. He’s unpredicatble and a little wild. He’s a good person, though and it’s obvious he really cares for Honor and wants to make sure she is okay, despite eveything.
I knew this was going to be a touching story but I didn’t expect it to be quite so deep and emotional. I could almost feel Honor and Rusty’s pain and I couldn’t help feeling bad and wishing things worked out for them. Their road trip had fun, sad, emotional and sweet moments. They met a lot of intereting people along the way, had some adventures and learn a lot about each other and Finn as well.
I thought the end of the book was perfect. I might not have thought the book would end the way it did but I really enjoyed it.
In Honor is a wonderful book about loss, family, friendship and learning how to move on. The book is well-written, fast paced and able to make the reader feel connected with the characters and what they are going trhough. In Honor is an emotional story full of great moments.
I would definitely recommend this book to any Young Adult fan.

Email ThisBlogThis!Share to TwitterShare to FacebookShare to Pinterest
Labels: book review, genre: young adult, Jessi Kirby, rating: somewhere between well worth your time and must read