Review - In The Shadow of the Moonlight - Awakening by J.J. Bidell 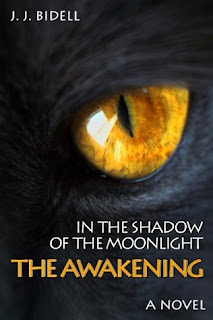 Summary:
Naomi Roberts finally receives a scholarship for a semester abroad in Maine. When Naomi’s grandmother suddenly claims that Naomi will soon be transformed into a panther, like her great grandmother Romina, Naomi believes it is a final and desperate attempt to keep her from departing to the USA.
Having arrived in Maine, Naomi enjoys her student life with new friends and her first love, Roman. Even though she feels magically drawn to a mysterious clearing in the woods, believes she is being watched and begins to sleepwalk, she does not remember the prophecy of her grandmother. Until her very first transformation. And - Naomi is not alone, which not only exposes her to mortal danger, but also Roman.
Review:
I received this book from the author in exchange of an honest review and this turned out to be a very interesting story that keeps the reader guessing what will happen next.
Naomi Roberts has always been sheltered by her mother and grandmother. She has grown up in a small town near London. When the opportunity to study in the University of Main arises, Naomi is excited but her grandmother doesn’t seem so much. Before she leaves her grandmother reveals a secret that Naomi doesn’t want to believe in- When she arrived in Maine, though, strange things start to happen and she is forced to accept the fact her grandmother might have been telling the truth.
I think Naomi is a good main character and so is Roman. He’s very sweet and they really did complete each other nicely. They were fun characters to read about.
The plot of this book is very interesting and it includes something for everyone: romance, action, suspense… It’s a coming of age story in a way.
In The Shadow of the Moonlight is a thrilling story that was able to keep me entertained and wondering what would happen next. There are a few things in the story that I didn’t like but I still thought it was very interesting.
My only big problem with this book was the fact it was translated from German and there were a few errors in syntax and semantics.
If you like a good paranormal story I think you’ll definitely be able to enjoy this book, though.
Rating: Somewhere Between Readable and Worth Your Time (3 ½ Stars)
Goodreads
Posted by Carla at 12:37 AM