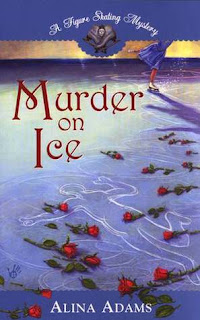 Summary:
In the spotlight: the all-new figure skating mystery series. From the author of Sarah Hughes: Skating to the Stars.

Figure skating is a cutthroat world. Just ask Rebecca "Bex" Levy, figure skating researcher for the 24/7 skating network-and Prime Crime's newest sleuth.
Review:
I received this book from the author in exchange of an honest review.
The World Figure Skating Championships is back to the USA and American skater Erin is slated to win, except she doesn’t.  She comes in second place behind a Russian skater.
The announcers for 24/7 network and former Olympic champions Diane and Francis Howarth let everyone know they think Erin should’ve won and, promptly a controversy centering around the Italian Judge Silvana Potenza and her decisions arises. To make everything worse Silvana is found dead the next day.
Silvana’s death is said to be an accident but the 24/7 network producer doesn’t buy into it. He charges Bex, the figure skating researcher, with the task of finding Silvana’s killer or else she’ll lose her job. Bex had no other option but to embark in a journey to discover who Silvana’s killer is.
This is a nice and fun story that includes great details about figure skating.
Bex is a good and fun character, although her witticism could be a little too much sometimes.
The story develops well, even if a little slowly at times, and even though the ending was a little abrupt and not very surprising, I enjoyed the twists and reading about Bex and her attempts to get every suspect’s story straight.
This is an enjoyable, well-written mystery. It can be a little predictable but it also is a fun read. I think any mystery fan will be able to enjoy Murder on Ice.
Rating: Readable (3 Stars)
Goodreads
Bookdepository
Posted by Carla at 7:44 PM