Review - A Temptation of Angels by Michelle Zink 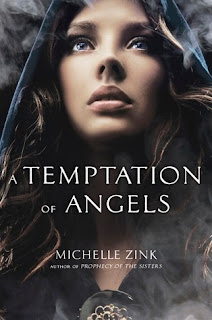 Summary:
Even angels make mistakes in this page-turning epic romance...

When her parents are murdered before her eyes, sixteen-year-old Helen Cartwright finds herself launched into an underground London where a mysterious organization called the Dictata controls the balance of good and evil. Helen learns that she is one of three remaining angelic descendants charged with protecting the world's past, present, and future. Unbeknownst to her, she has been trained her whole life to accept this responsibility. Now, as she finds herself torn between the angelic brothers protecting her and the devastatingly handsome childhood friend who wants to destroy her, she must prepare to be brave, to be hunted, and above all to be strong, because temptation will be hard to resist, even for an angel.
Review:
Judging from the blurb I was sure I would enjoy this book and I really did. A Temptation of Angels is a great story that combines history, romance and a paranormal element.
In A Temptation of Angels we discover that angels and demons exist and that Helen is one of those angels – a Keeper - and that her task is to protect the world from evil. To Helen this comes as a surprise and she’s suddenly thrown into a world she didn’t know existed.
Plus, she quickly finds out the Keepers job is not only to protect the world, though, there’s something else they are supposed to protect…
In A Temptation of Angels there’s a great mix of history, adventure, romance and a steampunk atmosphere that quickly drew me into the story.
I liked the characters in this book. Helen, the main character, is very interesting. She’s reserved but strong. Before she meets the Channing brothers a lot happens to her in a short time but she always remains strong.  She’s also stubborn, extremely curious and determined. She doesn’t let anyone tell her what to do, which I think is great. Of course she might have been a little bit reckless sometimes but her intentions were always good.
Now, the Channing brothers were great! Griffin is the younger brother and he’s sweet, funny, loyal, strong and a bit adventurous. He’s wonderful as a male lead and I think he’s exactly what Helen needs. She can trust and rely on him.
The older brother is Darius and even though he’s the exact opposite of Griffin I couldn’t help but to really like him. He’s headset on protecting his brother and fighting the evil that has hurt his family. He’s very serious, sarcastic and a little closed off. He can be a little brusque sometimes but I enjoyed knowing all it took to soften him up was Anna’s presence. Darius is a fascinating character and I would love to read more about him.
The other character is this story is Raum and I have to confess I’m not entirely sure about how I feel when it comes to him. It’s obvious he’s been through a lot and made some really bad choices.  I think he regretted them, though.
There’s a love triangle in this story but it didn’t bother me because I felt like it didn’t take over the story and both guys played completely different parts in Helen’s life.
The world Michelle Zink created is very entertaining and engrossing. There’s some action, a bit of mystery and romance.
The story is well-written and moves at a nice pace. It kept me very entertained and interested. I loved the whole setting and background for the story and thought it was all very imaginative.
If you like Young Adult Paranormal books that center around the existence of angels and demons and the battle between them, I think you’ll definitely enjoy this book.
Rating: Worth Your Time (4 Stars)
Goodreads
Bookdepository
Posted by Carla at 10:35 PM