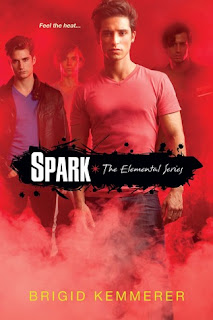 Summary:
Gabriel Merrick plays with fire. Literally.
Sometimes he can even control it. And sometimes he can’t. Like the fire that killed his parents.
Gabriel has always had his brothers to rely on, especially his twin, Nick. But when an arsonist starts wreaking havoc on their town, all the signs point to Gabriel. Only he’s not doing it.
More than Gabriel’s pride is at stake -- this could cost him his family, maybe his life. And no one seems to hear him. Except a shy sophomore named Layne, a brainiac who dresses in turtlenecks and jeans and keeps him totally off balance. Layne understands family problems, and she understands secrets. She has a few of her own.
Gabriel can’t let her guess about his brothers, about his abilities, about the danger that’s right at his heels. But there are some risks he can’t help taking.

The fuse is lit…

Review:
I really did enjoy Storm so I couldn’t wait to read Spark and I have to say the book did not disappoint me at all! The characters are still great and the story is once again entertaining and intriguing.
While in Storm we are presented to all the main characters and learn about the elementals and their powers, in Spark we get to know Gabriel a little better. The story focuses on him, his struggles to control his element, survive high school, deal with his brothers and understand his feelings for a girl he never though he could fall in love with.
All the characters I came to know and love in Storm are back and better than ever and I have to confess I still have a soft spot for Michael and think he is a great character!
I think all the Merrick boys have personalities and tempers influenced by their elements. Gabriel’s element is fire so it’s safe to say he can be a hothead sometimes. He can’t control his element very well yet and that bothers him a lot. Plus, he carries a lot of guilt around with him. There’s a softer side to him, though, one that the reader gets to see as the story develops. While he fights a lot with his brothers, it’s obvious he loves them and when Layne enters his life he starts to care for her as well.
When it comes to Layne, I think she was a great match for Gabriel. She’s different from most girls he knows and, in a way, that’s exactly what intrigues and interests Gabriel. I really enjoyed getting to know her and think she, just like Gabriel, did a lot of growing up in this book. She’s sweet and intelligent but she can also be quite though and brave when it’s needed.
The relationship between Gabriel and Layne developed well and there are some cute and sweet moments between them.
I really enjoyed Spark and think the story is perfectly balanced – there’s action, romance and mystery. The story kept me entertained right from the start and I couldn’t stop reading.
All in all, Spark is a great read. The book is very well-written, the story develops nicely and the characters are equally well-written, amazing and real. I couldn’t help but want things to work out for them.
I can’t wait for the next book in the series now! I need more from the Merrick boys. J
If you haven’t started reading this series yet, what are you waiting for?