Review - The Carny by Brooke Moss 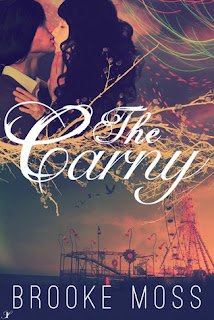 Summary:
At a town fair on the coast of Oregon, handsome Native American carny, Vincent Youngblood, bestows an unforgettable kiss on shy, awkward teenager, Charlotte Davenport. Then he disappears without another word, leaving her baffled and enamored.
Ten years later, Charlotte is still living in the small fishing town of Astoria, while being trained to--reluctantly--take over for her philandering hotelier father when he retires. After all, who else will do it? Her two perfect sisters are busy being married to their flawless husbands and having cookie cutter children, while Charlotte remains single, childless, and every bit as mousy as she was a decade ago.
As Charlotte struggles to climb out from underneath her judgmental parents thumb, the carnival rolls back into town, and Charlotte finds herself face to face with Vin again. He's back to run his father's carnival, walking away from a promising career in medicine he started in Chicago. Will her biased and judgmental family accept her relationship with a man who is not only a Native American, but works as a carny for a living? And what unsavory secrets bind the well-educated and seemingly superlative Vin to that ramshackle carnival?
After all, you can’t judge a carny by its cover
Review:
I received this book as part of the blog tour in exchange of an honest review.
Charlotte never forgot her first kiss at the town fair nor did she ever forget Vincent Youngblood. After several years and after being left at the altar Charlotte decides to move back home and take care of her mother.
When she goes to the carnival she meets Vincent again and, even though she knows her family won’t approve of her relationship with him, Charlotte accepts to go out with him.  She falls in love with him but it turns out Vincent has a few secrets…
Charlotte was a great main character. She’s in a bad place in her life but she hasn’t given up. She’s loyal, friendly and smart. I enjoyed the fact she was able to stand against her family when she knew they were against her relationship with an African American man.
Vincent is a good character as well. He has his issues and problems but I especially enjoyed the fact he’s able to help Charlotte with her self-esteem issues.
I really enjoyed the way this story developed and how the writer was able to create interesting characters and great dialogue.
The Carny is a very entertaining read with good characters and an even better dialogue. The book is fast-paced and well-written and was able to keep me completely interested.
If you like contemporary romance books, I’m sure you’ll be able to enjoy The Carny.

Rating: Worth Your Time ( 4 Stars)

Goodreads
Posted by Carla at 11:23 PM