Review - The Time Weaver by Thomas A. Knight 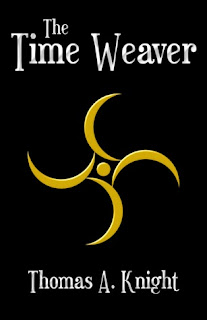 Summary:
It started with a car accident.
What should have killed thirty-year-old Seth Alkirk, instead causes time to stop. He didn't know what was happening as he took in the frozen world around him. He didn't know why he was the only one who could move, or breathe, or see what was going on. But when a rift opened in the middle of the intersection, and a vicious twelve-foot-tall creature stepped through into his world, Seth did know one thing for certain...
He had to run. Or die.
Enter a parallel world where magic exists. Discover a kingdom in danger of being overrun by a massive army. And follow Seth as he discovers he is more than a human – he is a Time Weaver who can change the balance of the coming war, if only he can learn to control his powers in time.

Review:
I received this book from the author in exchange of an honest review and it turned out to be a very interesting story.
A mysterious book his father left him and which was locked for 25 years finally opens for Seth Alkirk on his 30th birthday. Unfortunately, the book is written in a language he can’t understand and so he decides to ask his business partner for her.
The problem is, the day after Seth opens the book strange things start to happen. A glass appears to fall to the floor in slow motion, for instance, and when Seth is involved in a car accident time actually stops allowing him to walk away alive. But Seth is in no way free from danger.
This story kept me interested right from the start. Seth is a good main character and I couldn’t help but to feel connected to him and want to find out what would happen to him. All the characters in the book have different and exciting personalities and the dialogue between them is well-written.
When it comes to the story itself it was entertaining and fun with some unexpected twists and turns.
All in all, The Time Weaver is an entertaining, fast paced and well-written story with good characters.
It definitely is a good start to a series that puts a twist to the usual stories with magic and wizards.

Goodreads
Posted by Carla at 12:07 AM