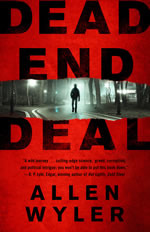 Summary:
World renowned neurosurgeon Jon Ritter is on the verge of a medical breakthrough that will change the world. His groundbreaking surgical treatment, using transplanted non-human stem cells, is set to eradicate the scourge of Alzheimer’s disease and give hope to millions. But when the procedure is slated for testing, it all comes to an abrupt and terrifying halt. Ritter’s colleague is gunned down and Ritter himself is threatened by a radical anti-abortion group that not only claims responsibility, but promises more of the same.
Faced with a dangerous reality but determined to succeed, Ritter turns to his long-time colleague, corporate biotech CEO Richard Stillman, for help. Together, they conspire to conduct a clandestine clinical trial in Seoul, Korea. But the danger is more determined, and more lethal, than Ritter could have imagined.
After successful surgical trials, Ritter and his allies are thrown into a horrifying nightmare scenario: The trial patients have been murdered and Ritter is the number one suspect. Aided by his beautiful lab assistant, Yeonhee, Ritter flees the country, now the target of an international manhunt involving Interpol, the FBI, zealous fanatics and a coldly efficient assassin named Fiest.

Review:
I’ve received this book in exchange of an honest review.
Neurosurgeon Jon Ritter has developed a treatment to reverse the effects of Alzheimer by using non-human stem cells. He is driven by the fact his grandmother has developed the disease and he may inherit the gene.
Not liking the fact biotech industries corporations are driven by greed, he refuses an industry offer to buy his treatment. Soon it becomes clear he will have to depend on that industry so he can survive the threats of a militant group.
I thought this was an interesting story about a guy that is extremely driven. The plot was action packed and great, even if the story had a slow start and dragged a little every now and then.
As the story developed I found myself more and more curious. I wanted to find out what would happen to Jon and where he would end up.
All in all, this is a very interesting story. I felt some scenes were a little rushed but the book is well-written and once the action starts the story becomes more and more interesting and intriguing.
If you enjoy medical thrillers, I think you’ll like this story.

Goodreads
Posted by Carla at 12:21 AM