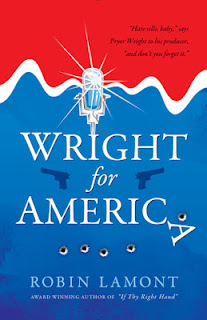 Summary:
Pryor Wright’s ultra-conservative radio show has millions of devout fans who are sure that the slurs and wild accusations fired at the liberal left prove him a true patriot. But when his venomous rantings catch Maren Garrity’s twin brother in the crossfire, the struggling actress pursues her own style of justice and enlists a troupe of fellow unemployed actors to teach Wright just how powerful words can be.
Review:
I have received this book from the author/publisher in exchange of an honest review.
Wright for America is the story of Marred an aspiring actress who decides to infiltrate Prior Wright’s organization after he – an ultra-conservative talk show host – let’s everyone know how he feels about gay people and several of his followers act upon his ideas and end up hurting Marren’s brother.
Wright for America is a witty, political satire with a few suspenseful moments.
There are several interesting and lively characters in this book and there are several subplots about them and a few social issues.
Wright for America is the kind of book not to be taken seriously. As I said, it is a political satire – it is meant to be fun not overly serious.
I think the author did a good job creating fun moments and delivering the message that every political act has consequences no matter which side of the political spectrum you stand.
All in all, Wright for American is an interesting, fast paced, light read that deals with an interesting theme in a funny way.

Email ThisBlogThis!Share to TwitterShare to FacebookShare to Pinterest
Labels: Author: Robin Lamont, book review, rating: somewhere between readable and worth your time