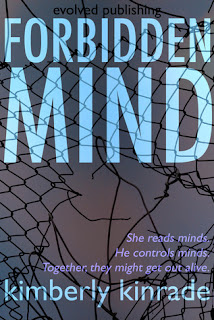 Summary:
She reads minds.
He controls minds.
Together, they might get out alive.

Sam thinks she's months away from freedom. After spending her life in a secret school, rented out to the rich and powerful as a paranormal spy, she is ready to head to college like any normal eighteen-year-old.
Only Sam isn't normal. She reads minds. And just before her big going-away party, she links to the mind of a young man who changes everything.
Drake wasn't raised as a 'Rent-A-Kid.' He was kidnapped and taken there by force. But his exceptional physical strength and powers of mind control make him very dangerous, especially to Sam.
When they meet, Sam is forced to face the truth of her situation, and to acknowledge that not all is as it seems in her picture-perfect world. For what awaits her on her eighteenth birthday isn't a trip to college, but an unexpected nightmare from which she may not be able to escape.
To survive, they must work together.
But will their powers be enough to save them before it's too late?
Review:
I received this book from the author in exchange of an honest review and Forbidden Mind is a thrilling and fascinating story full of twists that are able to take the reader by surprise.
In the world of Forbidden Mind some people, like Sam, have special, paranormal abilities. Sam can, in fact, read minds. She lived with other kids with abilities at a place they call Rent-A-Kid.
When she’s almost ready to leave, she meets a boy named Drake, though and that boy changes her whole life and everything she believes in.
The main character is Sam and it was easy to understand and connect to her. She’s strong, brave, full of spunk, rational and able to keep calm even at stressful times. She finds herself facing awful circumstances while wishing for a normal life. The author definitely did a good job creating a character that is easy to like and root for.
Drake is a very interesting character as well and he changes Sam’s whole life. The relationship between them was actually surprising and very unique. The bond between the two of them is definitely strong and I enjoyed reading about the way they often leaned on each other for support and even hope.
This book deals with some heavy, dark and serious themes and I think the author did a great job with them. The lack of compassion for other humans is an example of one of those issues.
I enjoyed this book and thought it was very interesting. Forbidden Mind is well written and the characters are easy to like and relate to. I think my only real complain about this book is that it is very short so there’s not much space for development of some details like, for instance, the Rent-A-Kind organization. The author still did a wonderful job with the story.
All in all, Forbidden Mind is a romantic, exciting and also dark story that was able to keep me entertained and curious.
Rating: Worth Your Time (4 Stars)
Goodreads
Posted by Carla at 9:12 PM