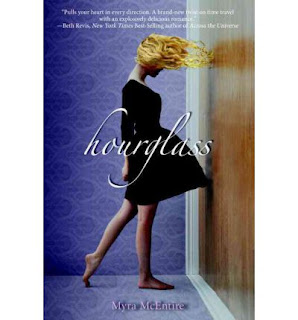 For seventeen-year-old Emerson Cole, life is about seeing what isn’t there: swooning Southern Belles; soldiers long forgotten; a haunting jazz trio that vanishes in an instant. Plagued by phantoms since her parents’ death, she just wants the apparitions to stop so she can be normal. She’s tried everything, but the visions keep coming back.

So when her well-meaning brother brings in a consultant from a secretive organization called the Hourglass, Emerson’s willing to try one last cure. But meeting Michael Weaver may not only change her future, it may change her past.
Who is this dark, mysterious, sympathetic guy, barely older than Emerson herself, who seems to believe every crazy word she says? Why does an electric charge seem to run through the room whenever he’s around? And why is he so insistent that he needs her help to prevent a death that never should have happened?
Review:
I had heard a lot about this book but it took me a while to decide I wanted to read it. I was a little apprehensive about the story but I have to confess it definitely lived up to the hype and Hourglass turned out to be a unique, sweet and interesting book that I really enjoyed.
Emerson is definitely a great main character. She may be a little violent sometimes but she’s also witty and sarcastic. She knows karate and is able to take care of herself.  Plus, she has no edit button! It was easy to like Emerson and enjoy the fact that, even though her past is far from perfect she managed to remain strong.
Now, Michael… I really liked him, even though I might have wanted to be able to smack some sense into him once or twice there. He can be really sweet, loyal and brave, though, and it’s obvious his feelings for Emerson are real.
Other characters like Kaleb also brought a lot to the story. He’s cocky and a smart-ass but there’s also a soft side to him that makes him very likeable.
I think the relationship between Emerson and Michael developed nicely and it felt real, even though there were a few moments of tension and jealously between them.
One thing I wasn’t a big fan of was the fact Emerson almost went completely gaga over Kaleb when he first showed up, even though there was Michael and she obviously had feelings for him. I was afraid an instant love triangle would happen and take over the story but, gladly, it didn’t.
Myra McEntire was able to create and an atmosphere in this book that is great and felt real. Plus, there’s a little bit of everything in this book: humor, romance, mystery, adventure and action.
Hourglass is a well-written book, with good characters and an interesting story. I enjoyed the fact that little hints about what’s really happening are given during the book culminating in several reveals at the end.
I think any Young Adult and Paranormal fan will definitely be able to enjoy this book.
Rating: Worth Your Time (4 Stars)
Goodreads
Bookdepository
Posted by Carla at 8:16 PM