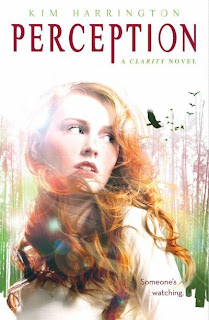 Summary:
When you can see things others can't, what do you do when someone's watching you?

Everybody knows about Clarity "Clare" Fern. She's the psychic girl in school, the one who can place her hands on something and see hidden visions from the past.
Only Clare would rather not be a celebrity. She prefers hanging back, observing. Her gift is not a game to her.
But then someone starts playing with her head . . . and heart. Messages and gifts from a secret admirer crop up everywhere Clare turns. Could they be from Gabriel, the gorgeous boy who gets Clare's pulse racing? Or from Justin, Clare's hopeful ex-boyfriend who'd do anything to win her back?
One thing is certain. Clare needs to solve this mystery, and soon. Because the messages are becoming sinister, and a girl in town has suddenly disappeared
Review:
I really liked Clarity so I couldn’t wait to read Perception and it definitely did not disappoint me. The story is definitely intense and gripping and it kept me well entertained.
After the events in Clarity, Clare hopes everything will settle down again but, unfortunately, they don’t.  Her brother is not the same anymore, a girl from school is missing and Clare begins to receive several messages and gifts from a secret admirer. She suspects her ex-boyfriend Justin or her friend Gabriel are behind it but quickly learns that is not the case. As the days go by and everything gets more and more complicated, Clare, once again, finds herself involved in a mystery she needs to solve.
I really like the character in this series. Clare has grown a lot and I think it’s easy to like her. She is aware and maybe even accepting of her abilities in this book and I enjoyed that.
Her relationship with Justin and Gabriel has developed nicely as well. Both guys are great and, even though, I really like Justin and his teasing and witty personality, Gabriel is still my favorite. He’s protective and brave and it was great getting to know him a little bit better in this book.
There’s a love triangle in this book, yes, but it’s very well-written and the fact Clare doesn’t spend her time complaining and thinking she’s not going to be able to survive without one of the guys is refreshing. Clare doesn’t mind being alone and she is well aware of the risk of choosing any of the guys.
Halfway through the story I had a pretty good guess about who the person that was sending Clare those messages and gifts was, but I still had fun trying to find out what that person’s intentions and motivations were.
I really enjoyed Perception. The book is well-written, the characters are interesting and the action and mystery is gripping and will make you want to unravel it.
I really do hope Kim Harrington has plans for at least another book in this series because I still have a lot of questions, especially about Clare’s father.
If you’re a fan of Young Adult and Paranormal fans with a good and interesting mystery, I think you’ll definitely be able to enjoy this book.
Rating: Between Worth Your Time and Must Read (4 ½ Stars)
Goodreads
Bookdepository