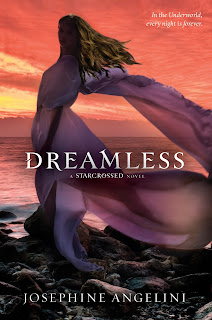 Summary:
Can true love be forgotten?

As the only scion who can descend into the Underworld, Helen Hamilton has been given a nearly impossible task. By night she wanders through Hades, trying to stop the endless cycle of revenge that has cursed her family. By day she struggles to overcome the fatigue that is rapidly eroding her sanity. Without Lucas by her side, Helen is not sure she has the strength to go on.
Just as Helen is pushed to her breaking point, a mysterious new Scion comes to her rescue. Funny and brave, Orion shields her from the dangers of the Underworld. But time is running out--a ruthless foe plots against them, and the Furies' cry for blood is growing louder.
As the ancient Greek world collides with the mortal one, Helen's sheltered life on Nantucket descends into chaos. But the hardest task of all will be forgetting Lucas Delos.

Review:
I enjoyed Starcrossed and thought it was an interesting story so I when Dreamless came out I picked it up and wasn’t disappointed. I enjoyed the story and tall the mythological references once again.
In Dreamless things basically pick out where they left off in Starcrossed. Being the Descender, Helen is the only one who can ride the Scions of the Furies. She struggles with her mission in the underworld, though. She wants to free the houses of the power of the furies and make sure Hector can go back to his family but that’s not exactly easy, especially when you still have to keep up the façade of being a normal girl.
To make everything even more difficult her relationship with Lucas becomes more and more difficult and painful. Only when another boy named Orion shows up in her life does Helen start to believe her mission can actually be accomplished. However if Orion is a new ally, there is also a new adversary who wants something for Helen and if he succeeds everything can change for the worse.
All the characters we came to know in Starcrossed are present in this book and some new ones are introduced.  They all went through some development and some of them changed a lot.
I like Helen and think she is a good main character but in Dreamless she manages to be even more stubborn than in the previous book. It’s easy to understand why she was like that and why her decisions weren’t always the best ones, though. A lot happens to her in this book but she always somehow manages to overcome the difficulties.
When it comes to Lucas, well, he really annoyed me sometimes in this book. He changed a lot but in the end he managed to redeem himself by proving the old Lucas we came to know and love in Starcrossed was still there. He was suffering as much or more than Helen was and that made him go off the deep end a little bit.
I actually really liked Orion and though he was a great match for Helen so the love triangle didn’t bother me like most of them do. Orion has a lot to deal with and his life hasn’t been easy but he’s sweet, funny and determined and he obviously likes Helen and is willing to help her in whichever way he can.
And I have to go ahead and confess I loved Hector in this one. The big guy, who always says it as he sees it, is a great character and I couldn’t help but want things to finally work out for him. Plus, I want one of his amazing hugs! :D
When it comes to the plot, I really enjoyed it and found it to be more interesting and appealing than the plot of Starcrossed. There’s a lot of action and some mystery. Helen has to find a way to free the Furies while it’s obvious her adversaries aren’t messing around and will do anything to get what they want from her.
I also enjoyed the fact the story is sometimes told in other point of views besides Helen’s. It allows the reader to understand what is going on a little better. Also, I think Josephine Angelini did a great job describing the several different landscapes of the Underworld.
All in all, I really enjoyed this book. I’m a fan of mythology and its variations so this series works for me. The book is well-written, the plot is interesting and the characters suffer some developed as the story develops.
I’m looking forward to the next book in the series and if you like Young Adult Paranormal books and mythology, I think you will enjoy this book.